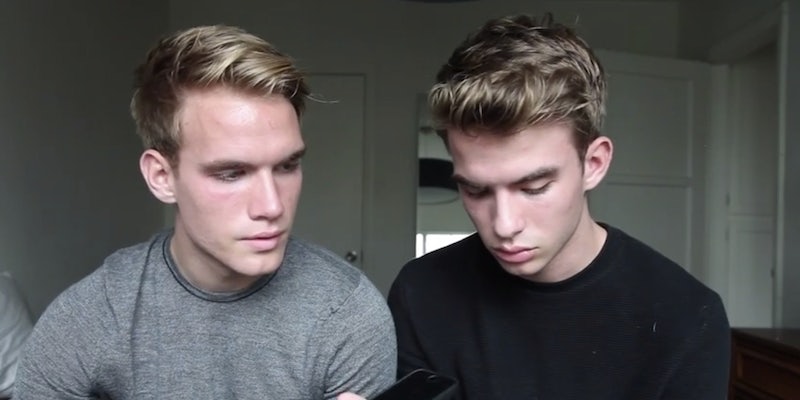 They were both brave to say it and confident to share it.

Twin YouTubers Austin and Aaron Rhodes decided to kick off 2015 by getting something important off their chest in front of their more than 56,000 subscribers. The Rhodes twins took to their channel to come out, while at the same time informing the last person in their family who didn’t know: their father.

The duo filmed the entire emotional phone call with their dad. As they tearfully tell him that they’re both gay and that they hope he still loves them, he interrupts and says, “It’s the way things are, you know? You’re grown people. You grew up in a lot different generation than me. I just don’t really know what to say—you know I love you both and that’ll never change.”

He goes on to talk about how his job has made him more accepting and ends the phone call repeating that he loves them both.

This is far from the first time YouTubers have used their channels to make formal announcements about their sexuality. Last year, YouTube megastar Connor Franta released a coming-out video to much fanfare. It’s great to see an up-and-coming pair like the Rhodes twins, who only started on the platform six months ago, feel so comfortable sharing private moments so early in their YouTube journey.