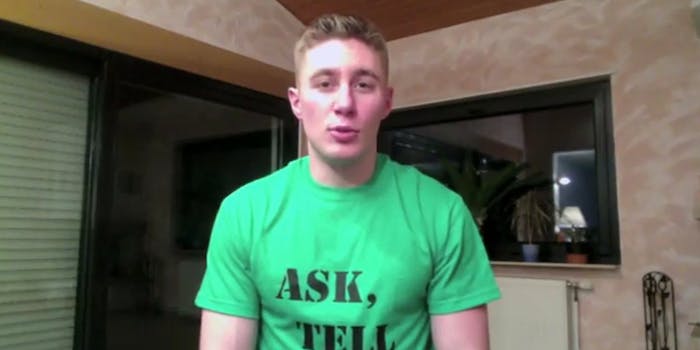 Gay soldier who came out on YouTube now reveals even more

When Randy Phillips came out on YouTube, he made sure to obscure his face. Now he reveals a lot more–including his personality, exercise tips, and advice for the young and closeted.

What started out as an anonymous video blog for gay solider Randy Phillips has turned into a revealing, raucous, and sometimes risque, look into his life.

Phillips’ YouTube channel, AreYouSuprised, began with a sober look at being gay in the United States military, frequently showing just his torso (and not head) to conceal his identity in the pre-Don’t Ask, Don’t Tell era. Following the repeal, the 21-year-old airman became a viral sensation when he came out to his father in Sept.

Now the limelight has faded a bit and Phillip’s no longer needs to conceal his true identity. His most recent videos give us a glimpse into who he really is: an active guy who disapproves gay stereotypes and smartly capitalizes from his new-found popularity and sex appeal.

His channel, which has more than 35,000 subscribers and contains just 31 videos with a wealth of knowledge and a dose of eye candy. Phillips’ mix of light-hearted videos and serious revelations is entertaining to watch, and judging by the view counts, many agree.

He’s found the perfect balance of becoming a sustainable YouTube celebrity with his finely curated channel that offers a satisfying balance compared to others out there.

Sure you can gawk at his shirtless oblique workout and stop there. But you would be missing out on the fun with his travel diaries, like this one in Paris. And while his video on how to change your oil is a bit dense, Phillips’ grocery trip does provide helpful tips to improve your diet (Phillips suggests eating cottage cheese for protein.)

On the flip side, his revealing contribution to the It Gets Better campaign is one the most candid ones we’ve seen, and his spontaneous speech for National Coming Out Day in Oct. was laconic and sincere.

If you’re looking to use YouTube as a personal confessional, but without being trite or annoying, take a page from Phillips’ playbook and share what you know best while giving viewers a personal look at your life that only you can provide.