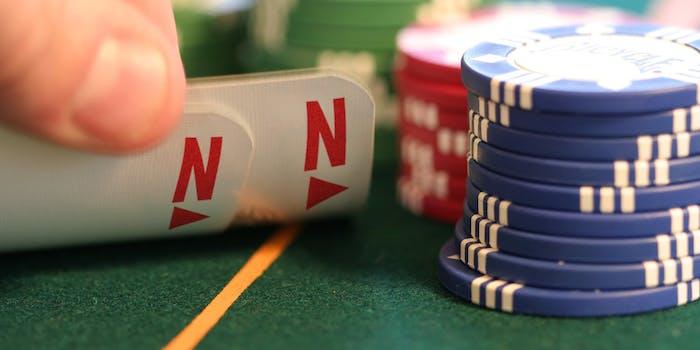 With the World Poker Tour airing April 25-29, get in the spirit by watching some gambling films on Netflix.

You know what they say about gambling: Sometimes you win, sometimes you lose, and sometimes you tie and everybody’s annoyed. Lucky for you, picking a gambling film to watch on Netflix doesn’t have to be a gamble: By reading this handy roundup, you get to win every time.

Here’s a pro tip: Don’t put your chips on Double Down. That advice is free, kid—but you’ll have to do the legwork, and read on, to get the rest of the scoop.

During the mid- to late 2000s, odds are you probably knew somebody who was a professional online poker player, and it’s highly likely that person was a massive fan of Rounders. The movie’s motto was that poker (at least Texas Hold ’Em) was not a game of luck—that any Rainman could arm himself with the right statistics and grind out profits on the six virtual tables open on his laptop.

Like The Fast and the Furious and the car culture boom of the early 2000s, I avoided Rounders because the culture it inspired just wasn’t one that interested me. As it would turn out with both films, that was a mistake. Rounders falls just shy of being a classic, but it’s a very well-made, tightly paced thriller with fantastic performances from Edward Norton and Matt Damon. Norton is so good that, despite the fact that his character could almost be cut from the movie entirely with no effect on the plot, you don’t even care­.

Some lessons to be learned from watching Rounders:

This is a Clive Owen movie from before he was the strapping, charismastic lad that we know him as today. In Croupier, he’s more of a prototypical Ryan Gosling by way of The Driver—a good-natured sociopath who’s just doing the work his genes cursed him to excel at. He’s an aspiring writer but takes a job as a croupier, through a hookup via his shady father, after coming to terms with the fact that writing novels rarely results in an influx of cash. He hates the job, and he shows obvious contempt for his boss and the entire operation, but his boss doesn’t care, because he’s just so damn good at what he does.

A croupier, for those who aren’t American, is a dealer at a casino. They’re “the house,” the person the suckers at the roulette, craps, and blackjack tables are always playing against. To keep the job interesting, Jack (Owen) decides to write a novel about his experience working at the casino. The casino has a strict list of rules for its employees, but Jack ends up breaking them all for the sake of the story—including sleeping with colleagues and clients.

The pacing of the film quite brilliantly captures the sense of time inside a casino. There’s really no telling how much time has passed—maybe a week, maybe a month. Events seem to just march on, mechanically, like the revolving reels of an old slot machine. It’s a damn fine film—and a big shame that it bombed. Owen would eventually rise to superstardom, but he’d certainly done so much faster if anybody had watched Croupier upon its release. This is an Oscar-caliber film that somehow flew completely under the radar.

Rating: Double or nothing

I couldn’t find a trailer for Double Down, so just watch this montage called “Jason Priestley smoking cool in Double Down.” The movie has some really engaging acting—everybody feels real and natural—but that’s about it for the nice parts of the movie, so the above video should save you the hassle of watching the rest of it.

This is a truly insufferable film, and it ended up taking me three days to finish it. It’s about televised sports betting, which is the most boring type of betting you can put on a camera, and it’s exceedingly difficult to watch terrible, overprivileged white males in their 30s attaining their life goal through this sort of betting—especially when that goal is to open the douchiest sports club imaginable.

I blame Rounders for something like Double Down existing. I also blame Quentin Tarantino for making everybody think they can write naturalistic dialogue, toss in some skinny ties, and have themselves an indie gem.

The movie was originally released as Zigs, after a diner in the film with the low-budget interiors of at least three different restaurants. It must have been repackaged as Double Down for its VOD release when somebody realized that somebody might actually watch the film if they thought poker was somehow involved. Beware, merry viewer: There is no poker involved—just dumb, asshole blackjack and 30-somethings dude-bros pretending they’re in Swingers while making “awwwww nooo!” or “awwww yeeeeaa!” faces at television screens that you can’t see.

Double Down, or Zigs, or whatever it’s called, is the worst thing to happen on my television since MSNBC drafted Al Sharpton and forced me to start getting my daily news from CNN. The saddest thing, though? There’s probably a good six-episode webseries to be cut out of this footage somewhere, because six is the number of times that I thought “wait… I’m not hating this right now” while watching it.

I’m not an expert on classic cinema, but, from the knowledge that I do have, I think The Hustler is the film in which Paul Newman and Jackie Gleason invented manhood. Eddie Felson (Newman) is a drunken braggart whose biggest enemy is his ego, and Minnesota Fats (Gleason) is his foil—a collected, excellently dressed professional who’s there to grind his opponent down and walk away from the billiards table with their money.

This film basically birthed Paul Newman, predating all of those movies in which he basically played the same character, but alongside Robert Redford. Here, he’s a lot like a Clint Eastwood that speaks without his teeth clenched, and it’s a shame that we never got a film where they just sat at a table and traded manly one-liners over a bottle of whiskey until they attempted to fight each other and passed out at the 90-minute mark. Jesus, just imagine the Criterion release for that one…

The Hustler also boasts both a fairly obviously gay character and an extremely progressive feminine character, played by Piper Laurie, who attends college twice a week and spends the other days drinking. Sure, her progressivism doesn’t end well (spoiler alert), but this was 1961, so the film deserves some credit for her character attending college at all and seeming to enjoy sex.

Added bonuses: The real-life Jake Lamotta, played by Robert DeNiro in Raging Bull, has a blink-and-you’ll-miss-it role as a bartender. Also, Gleason and Newman performed all their own pool shots, with the exception of something called a massé shot, which was performed by Willie Mosconi.

Photo via John Morgan/Flickr (CC BY 2.0) | Remix by Jason Reed