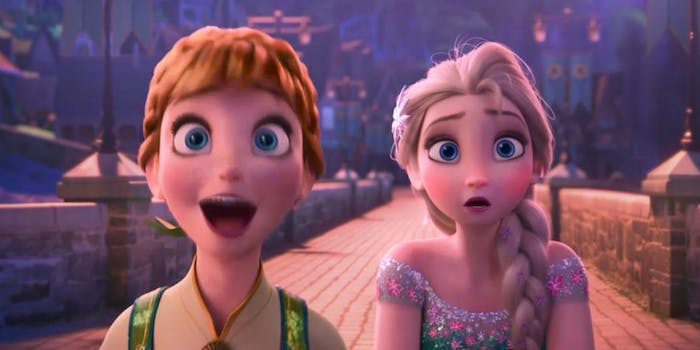 Elsa, Anna, Kristoff, and the rest of your favorite 'Frozen' characters will return in this animated short.

Queen Elsa may be wanted by police in Kentucky, but nothing is going to stop the main character from Frozen from appearing in theaters across the country next month in a new animated short called Frozen Fever. On Wednesday, Disney released the first trailer for the sequel exclusively on Good Morning America, and from the brief clips it looks like things are going to get exciting as the characters try to celebrate Anna’s birthday.

Elsa, Anna, Kristoff, Olaf, and Sven return for this seven-minute film, which will include a new original song from the songwriters behind “Let It Go.” The trailer is less than a minute long, but it gives viewers a glimpse of the gang as they prepare for Anna’s birthday party with the expected amount of Elsa’s powers, Olaf’s comedy, Kristoff and Sven’s enthusiasm, and Anna’s contagious excitement.

Watch the trailer below, and check out the full short sequel when it premieres before Disney’s live-action Cinderella starting March 13.