When a fellow Tumblr user said she never wanted to see a photo of The Frogman again, he posted a cute response. His fans, however, took things a bit too far.

Tumblr icon The Frogman thought that he was making a harmless joke. What he really made was a miserable afternoon for a girl who was simply voicing her opinion to her friends.

In a Wednesday post that’s since been deleted, The Frogman brought attention to a fellow community member’s cold-hearted post (also since deleted), one that made mention of her disdain for the beloved Tumblr personality and expressed her desire to never see another photo of him again.

Taking notice of the fact that the user, whose Tumblr lists her name as Michelle, made photo replies optional on her page, The Frogman responded to her post with a photo of himself in the prone position.

Then he took a screenshot of the post and response and posted the entire discourse on his own page.

A hailstorm of hate followed, as supporters of The Frogman came out in droves to defend their Tumblr hero. Malicious messages started showing up in Michelle’s inbox, many of which she ended up reposting on her page. And though she was able to maintain some semblance of a sense of humor about the barrage, the reaction from Frogman fans bordered on excessive. Michelle reposted over seven pages of hateful messages to her Tumblr. 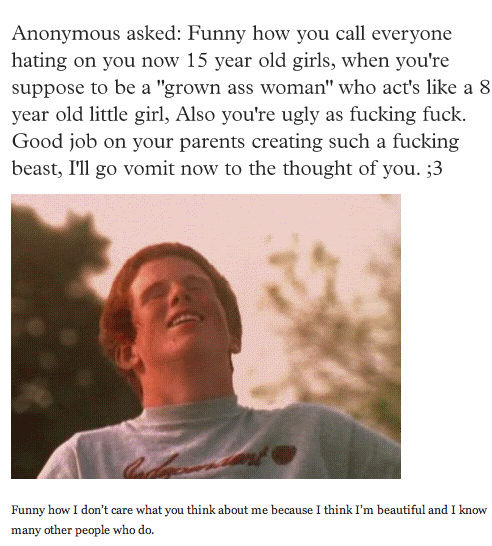 Last night, The Frogman apologized for his response to Michelle’s post, admitting to his fans that he doesn’t always “think things through.”


I can’t always predict the consequences of my actions. I did something that I thought was harmless fun and a young woman ended up getting mercilessly harassed.
She made a post saying I was dumb and she never wanted to see my face again. I replied with a picture of myself. I thought that was pretty clever and so I posted it to my blog. I believed that was the end of it and I took a nap.
When I woke up I found out that some of my followers decided to go to her blog and say some pretty vile things. They bullied her. After seeing some of the messages I felt pretty sick and I’m pretty sure I deserved to.
I thought my initial response to her post was measured and appropriate. I just didn’t think about how far other people might take it. I’m not an insignificant basement dweller anymore. I have a lot of eyeballs on what I do and there is a responsibility that comes with that.

He then pledged to head to Michelle’s blog to offer her a personal apology. That post hasn’t been made public, but it appears as though Michelle has accepted his note.

“I deleted my original post but I’m going to leave all of my hate up,” she wrote. “I’ll let go what frog man did because what he did was unimportant. His fans however were completely and unnecessarily rude all because I voiced an opinion that happened to bash someone they might [enjoy].”

“Frogman has been forgiven so now leave me alone to continue to not like him.”

Photo via The Frogman