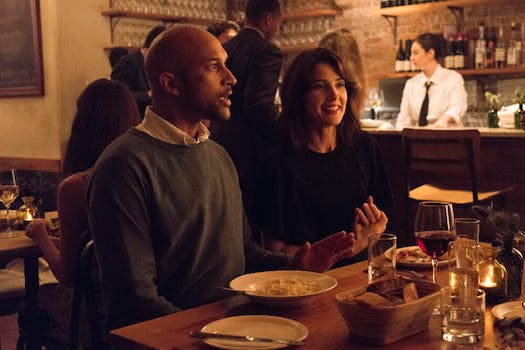 Despite its stacked cast, this Netflix series falls flat.

Few things are sadder in television than wasted talent, and Netflix’s new show, Friends From College, squanders its lot of heavyweights.

Starring a murderer’s row of great actors and co-created by the almost always reliable Nicholas Stoller (Forgetting Sarah Marshall, Get Him to the Greek, The Muppets, The Five-Year Engagement, the Neighbors films, The Carmichael Show) with his wife, Francesca Delbanco, Friends From College should, in theory, have everything going for it. Instead this dramedy about a group of friends from Harvard who reunite when two of them move to New York is weighed down by tonal miscalculations and tired stories.

I’m a sucker for this subgenre of serio-comedy. The story is a familiar one. Everything from the works of Woody Allen, to The Big Chill, to Thirtysomething, to Friends, to Friends with Kids, to the recent output of Noah Baumbach, to any other number of ensemble pieces about aging and nostalgia would qualify as predecessors. This, of course, is part of the problem. There are so many better stories about the same subject already out there.

Of course, there are reasons for a show like Friends From College to exist. The idea of examining Gen-Xers as they reach middle age presents plenty of opportunities for existential investigation. What happened to this once-disaffected, much-maligned group after they grew up, got jobs, and got everything they wanted? Are they happy, now that the millennials are the ones everybody’s mad at? Friends From College suggests that the same generation which was so aimless in Reality Bites is no less confused now, even after they’ve “made it” in the world.

But surely every generation learns at some point that you’ll never have all the answers, that no one thing can make you happy and solve your problems.

That doesn’t stop the characters in Friends From College from trying to find some magic solution anyway, usually by falling back into old habits. Ultimately, it’s a show about nostalgia that never fully reckons with the topic. Meanwhile, all the other usual tropes about middle-age angst are trotted out too: Infidelity, conception trouble, career dissatisfaction, and class struggle.

The complete lack of originality that Friends From College brings to these ideas makes the show dull as hell. For instance, there’s a running screed against the evils of young adult literature and the uselessness of franchises like Twilight. It’s a tired riff on a series that’s more than 10 years old.

As is often the case in these types of shows and movies, everybody lives in fantastic New York apartments, apparently able to afford the fantastically high rent. This kind of lifestyle exaggeration can be overlooked on a Master of None, or any other series that has something fresh to say about its characters and the city they live in. Yet Friends From College makes it nearly impossible to feel empathy for this whiny, (mostly) white, rich group of Harvard-educated narcissists.

These folks are not flawed in any kind of complex or believable way. The show doesn’t have any emotional reach beyond the screen you’re watching it on.

Nat Faxon (Married), Fred Savage (The Wonder Years), Keegan-Michael Key (Key and Peele), Cobie Smulders (How I Met Your Mother), and more do their best to save the show, but none of them are quite up to the task. A terrific lineup of guest stars like Ike Barinholtz, Seth Rogen, and Kate McKinnon also pop in, which helps. Several good performances come out of left field, like Greg Germann, as a smarmy Wall Street husband. Germann almost always plays jerk, but here he’s a jerk with a surprising amount of heart. Then there’s Billy Eichner, in a shockingly un-shouty performance as Fred Savage’s partner.

Key personifies what’s wrong with Friends From College. As it increasingly becomes clear that his comedy partner Jordan Peele’s future lies behind the camera, Key has proven time and again that he is a preternaturally gifted performer (check out last year’s excellent Don’t Think Twice if you want to see his best work.) However Key’s performance as Ethan, a struggling writer, is never believable. Maybe it’s that he’s always so full of life and energy, it’s hard to imagine him as a pretentious novelist, obsessed with creating some stuffy masterpiece. It creates a strange gap between execution and subject matter.

The same could be said for the way Stoller handles the tone of entire show. The impressive balancing act between strife and comic set pieces that he mastered so well in several of his films is all but absent here. To the show’s credit, there were a lot of moments I chuckled at. But it never relaxes, never settles into a groove—and not just because of all the intentionally awkward comedy.

The jokes range from a philosophical debate on the merits of altruism versus Kantianism versus relativism, and a Wall Street bro putting his dick on a table (and that’s just in one episode). And mixed in with it all is the show’s nervous energy. I guess that’s one positive about Friends From College: Unlike some dramedies, it’s never lazy, and always trying to be funny. Sadly though, trying is the operative word. Perhaps some of the same beats would’ve played better in a feature, but stretched over eight episodes, much of the humor comes across as haphazard and random.

There are some pleasures to Friends From College for those willing to stick it out till the end. It’s a good-looking show with a handful of laughs, and at only eight episodes, it’s a refreshingly manageable time commitment for a Netflix series. It also has a very clever title sequence, which manages to evoke what the show is about in several quick shots.

If you’re a sucker like me for these kinds of meandering nostalgia fests, you might want to give this one a try. Otherwise, Friends From College is likely to stay at the bottom of your My List for a very long time.