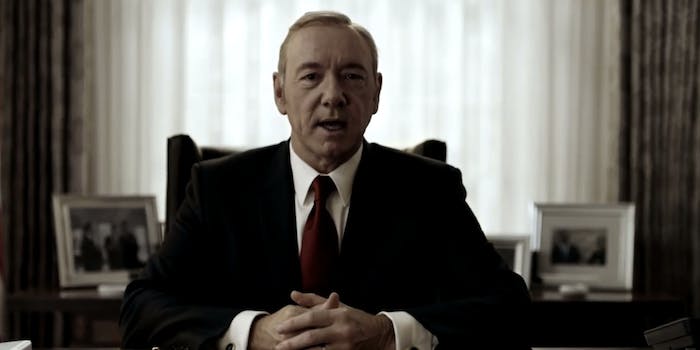 Frank Underwood has officially announced his candidacy for president

Netflix found the perfect time to begin the promotion for the new season of “House of Cards” and it was during Tuesday night’s (Dec. 15) Republican Presidential Debate.

While the candidates consistently attacked each other’s policy and berated each other with shouted insults and name calling, a message from Frank Underwood (Kevin Spacey) alleviated the debate chaos, if only for a few seconds.

Here, President Underwood’s advertisement showcases the greatness of our country and pledges comfort and safety to American families from sea to shining sea. Putting people before politics, the commercial highlights Underwood’s refusal to settle. By the looks of things, this TV President is only getting started.

It’s the perfect climate for Underwood’s return and it won’t be too much longer of a wait before Francis and Claire Underwood (Robin Wright) return to continue following their onslaught … err, leadership.

“House of Cards” returns for its fourth season on Friday, March 4, 2016 on Netflix.

Screengrab via House of Cards/Twitter