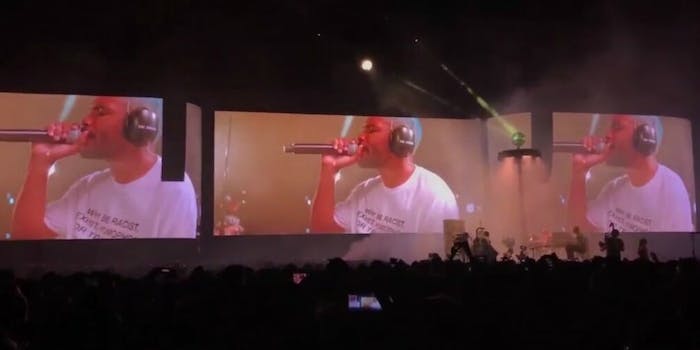 Screengrab via The Weeknd Live/YouTube

This Frank Ocean shirt is sending the internet into a tizzy

Here's where you can buy it.

A few days after Frank Ocean made the world fall in love with his Brad Pitt bromance, the singer gave his fans yet another reason to feel warm inside.

This time, it’s because of his fashion sense, specifically the T-shirt he was sporting at the Panorama musical festival in New York on Friday night.

I need this shirt in medium please.https://t.co/PsOtoducn1

In this case, Ocean isn’t the trendsetter for the viral shirt. It already bounced around the internet when it was tweeted in January. That initial tweet eventually garnered 87,000 retweets and 191,000 likes.

The T-shirt is available for purchase at Green Box Shop, an online retailer that makes and sells shirts with social justice messages and that’s run by Kayla Robinson, an 18-year-old “Afro-Latina bisexual woman who can’t really summarize herself with a cliche sentence.”