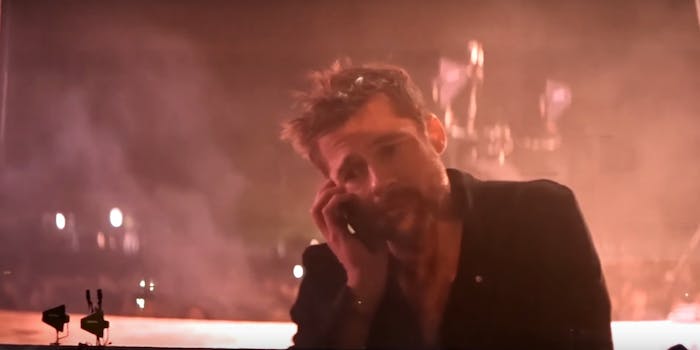 Anyone who’s looking for a celebrity friendship of epically heartwarming proportions may have found their men in Brad Pitt and Frank Ocean. The longtime Hollywood leading man and the R&B singer-songwriter were both at the 2017 FYF Fest in Los Angeles on Saturday night, with Ocean crooning to the 53-year-old actor in a dramatic cameo paired with the Jackson 5’s 1971 hit single, “Never Can Say Goodbye.”

The audience seemed to enjoy the unexpected cameo, based on its reaction when the enormous onstage screens flashed to Pitt’s face while he held a phone to his ear, a forlorn look on his face. Video from the performance shows that Pitt’s presence whipped up some cheers from the crowd, and judging from reactions on social media, it seems like it must’ve been a pretty cool moment of recognition of the pair’s recently public friendliness.

frank ocean, spike jonze, and brad pitt all on the same stage. I hope everyone there appreciates the magnitude of what they just saw

In May, Pitt offered some seemingly earnest praise for Ocean and his music in an interview with GQ Style, commenting on how he’d recently started listening to R&B and found himself disarmed by Ocean’s artistic honesty.

“I’ve been listening to a lot of Frank Ocean,” Pitt told the magazine. “I find this young man so special. Talk about getting to the raw truth. He’s painfully honest. He’s very, very special. I can’t find a bad one.”

Pitt praised Ocean’s music for helping him emotionally navigate his divorce from fellow star actor Angelina Jolie, a fact which apparently moved Ocean to wear a shirt with Pitt’s face on it during a concert in June, according to the New York Daily News. He also dedicated the song to Pitt on Saturday night.

“This is for our special friend,” Ocean said, after it was over.