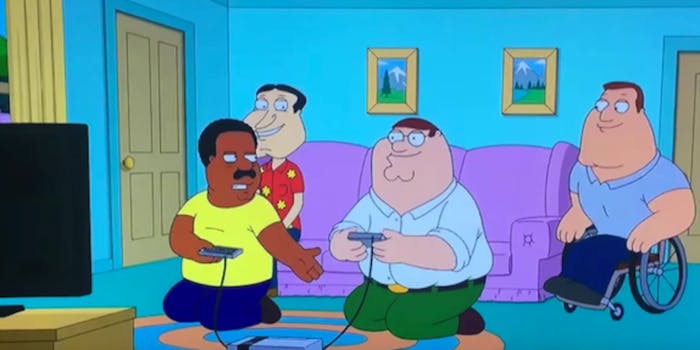 Did Fox use a YouTube clip for ‘Family Guy’ and then have the original video taken down?

This is one for the books.

In a move that many are finding confounding, Fox had a clip from the 1980s Nintendo game Double Dribble pulled from YouTube this week claiming it infringed its copyright. The catch? The only reason the YouTube clip resembled Fox’s property is because it probably used it as source material for a recent episode of Family Guy.

In other words: it seems likely that Fox sampled a clip hosted on YouTube in the episode, aired the episode, and then had YouTube pull down the original clip because it resembled what had aired.

It doesn’t take a trained lawyer to wonder: Uh, what?

What’s weirder still is that YouTube complied. The original clip, which depicted a glitch that allows you to sink a 3-point shot in the game, is no longer available.

Conveniently, though, the Family Guy moment in question is available to watch via a video hosted on—you guessed it—YouTube.

The original glitch footage was uploaded by YouTuber sw1tched in February 2009.

“This is an automatic shot my brothers and I found on the NES Double Dribble back in the 80s when it was released,”  sw1tched wrote. “I know others know this also, but as long as you release at the right point, it is automatic. The half-court shot I took at the end goes in 80 (percent) of the time, but I didn’t want to keep recording….HAHA.”

While it is possible that Fox recreated the YouTuber’s gameplay frame-for-frame, it seems unlikely.

“It’s most likely that this is just another example of YouTube’s Content ID system automatically taking down a video without regard to actual copyright ownership and fair use,” Fight for the Future CTO Jeff Lyon told TorrentFreak.

“As soon as Fox broadcast that Family Guy episode, their robots started taking down any footage that appeared to be reposted from the show—and in this case they took down the footage they stole from an independent creator,” he said.