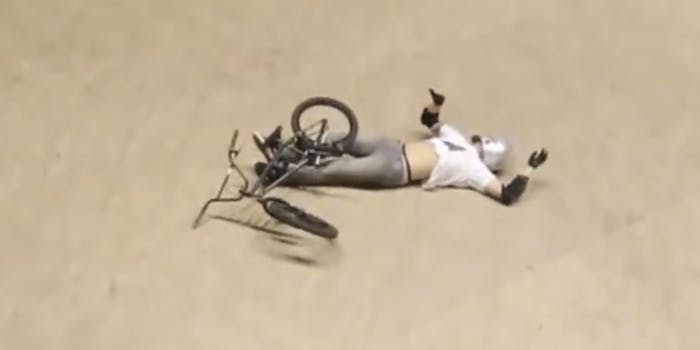 America’s love affair continues with all things videos that show people falling off of bicycles.

Somewhere in that great rerun in the sky, Allen Funt, the creator of Candid Camera, is smiling.

America’s love affair continues with all things videos that show people falling off of bicycles, getting smashed by surfboards, and (everyone’s favorite) getting hit in the family jewels by a football. Fox announced it has picked up Jukin Media’s wildly popular YouTube channel, FailArmy, for its Friday night TV roster.

Following in the footsteps of the original “human foibles captured on video” show, Candid Camera, its sibling America’s Funniest Home Videos, and its stupid younger cousin Jackass, FailArmy is a compilation of accidents and self-inflicted injuries that are equal parts cringe-worthy and hilarious. The more outrageous the fail or injury, the bigger the yucks. With more than five million subscribers on its YouTube channel, the move to television is a no brainer. In an August interview, Jukin Media said the show, which has only been around for two years, had surpassed one billion views.

The television version, which is scheduled to debut at 8pm EST on Jan. 16, 2015, will have a panel of yet-to-be-announced comedians review each week’s fails and select one to be the “fail of the week.” One could imagine the weekly prize is payment of a large insurance premium.