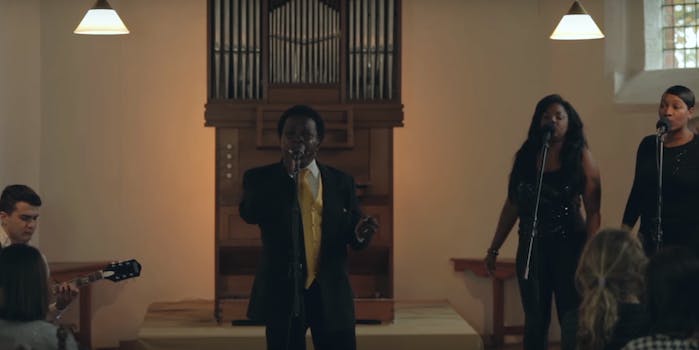 The soul survivors at your multi-day music fest

Why events like Fortress Festival are defiant outposts for Black music.

Lee Fields has been singing soul since the ’60s. His voice is an American treasure: Husky and mournful, it makes love songs like 2012’s “Wish You Were Here” universal. He’s toured the world, and the 60-something still writes with the urgency of someone anticipating the robot uprising.

That’s because he is.

“The greatest adversary human beings face is artificial intelligence,” he tells the Daily Dot. “They’re not programming feelings, it’s all about logic. And logically speaking… all of the animals that are perishing on Earth, all of the pollution—we’re the cause. And if our fate was placed into artificial intelligence, then I’m quite sure it would be logical for us to be destroyed.”

He’s been thinking about this a lot, writing a new album and preparing for this weekend’s Fortress Festival in Fort Worth, Texas. The two-day event is headlined by Father John Misty and it’s the kind of regional music fest that’s thriving in the U.S.

The New York Times in 2016 wrote that its critics were less into tentpole mainstream pop festivals like Coachella because they “look increasingly alike in their vision of a codified, consensual, safe and purchasable bohemia” and they were more interested in “festivals with purpose.” Fortress is an internet-age reaction: People want festivals because, among other things, songs from their playlists converge into a wristband-accessible buffet. Fields and acts like Latin R&B psych philosophers Chicano Batman, or Hendrix disciples like guitarist Stone Mecca have turned these niche events into revival tents for live soul, and it’s a defiant outpost.

Fields isn’t just an enlightened dude who thinks about tomorrow, his side-eye toward “algorithms” in music is rooted in an existential fear of losing that loving feeling. In recording his latest album, which he says is tentatively planned for the fall, he’s turning anxiety about TV news into humanist fits. He’s not about socially conscious preaching, but rather capturing the times via songs about real life—going to work or fighting to keep a marriage together.

“People can feel the connection, between human to human. But as we veer off to where everything is computer generated, it loses feeling,” he says, thinking optimistically about mankind. “Sooner or later we’ll figure out how to straighten up the mess that we made.

“But that’s the reason I stay with soul music: The future is the past and the past is the future. It’s a circle, man, the alpha, and the omega.”

Guitarist Stone Mecca, performing at Fortress with RZA, has spent the past decade building enough capital as a hired hand to make another solo album. He’s helped RZA learn music theory and even taught his kids. He’s pretty sure that RZA’s one-copy-only Wu-Tang album, infamously acquired by pharma-bro Martin Shkreli and later seized by the federal government as Shkreli went to trial and was convicted of securities fraud, features his work.

“I probably did something on that album,” Stone Mecca says of Once Upon a Time in Shaolin. “We did so much stuff that keeps coming out that I didn’t even know I was on.”

Dude’s recorded so much that he forgets about the music until the internet reminds him. An old Kanye West song will hit the web for example; suddenly he gets a flurry of social media attention, he says. He’ll get emails from Portuguese couples who played “A Walk” at their wedding ceremonies—a 10-year-old song that was quietly uploaded to Spotify, from an album that he says never enjoyed an official release.

Stone Mecca and Fields are pretty lax when it comes to curating their digital presence. Stone Mecca’s Twitter bio links to stonemecca.com, and clicking through reveals that his expired website is for sale via HugeDomains.com. Fields’ Spotify catalog only goes back to 2009, which leaves out more than four decades of his work.

“They had to tell me to join Twitter and Instagram,” Stone Mecca says. “If you think about superstars back in the day, there was no social media so there was a mystique about them. We made up our own minds of who they were and how they lived… and we made them superstars. For me, it feels like too much reality TV.”

Chicano Batman, on the other hand, thinks a lot about its digital presence. “We’re just trying to be part of the conversation,” singer Bardo Martinez says.

The band doesn’t have consensus on how it self-identifies, but bassist Eduardo Arenas says you can call it soul, psychedelic rock, Latin rock, Latin soul, or even funk. Onstage the band is prone to wearing matching, vintage tuxedos in colors like plum. Its Instagram feed is vibrant and its YouTube channel boasts 30,000 followers.

The band did an advertising campaign with Johnnie Walker in 2017 where it sang the Woodie Guthrie standby “This Land Is Your Land.” Given the polarized times, having four brown men do this was a political act. But Arenas says you need to live it and let that speak for itself.

“The goal is to express ourselves musically,” he says. “When you do that, there’s a lot of things that happen naturally.”

Like Fields, it’s not about preaching against Donald Trump but putting forth a feeling. Do that and suddenly, “your art seeps into the emotional existence of people.” And even better, you reach Latinos in Oklahoma City.

Chicano Batman concedes that it’s something of a “playlist” band. They’ll pop up on playlists from different genres, and it means the band can fit in wherever.

“There’s so many music heads and people will understand those references,” Arenas says.

These soul acts, playing analog music for the age of 20-minute mid-afternoon sets, all grapple with a conundrum presented by Arenas: “How do you connect with the representation of yourself that you’re putting out there?”

It’s not just good music, the three of them say, but by writing music devoid of trends and built to last. Like Fields says, soul is “about surviving” and about “human beings actually considering consequences.”

Fields distrusts computers because they don’t have a soul, in the biblical sense. Like he mentions, the “computer has no soul. It’s totally about logic, but all people are from the spirit so we’ve got to keep that in the equation.”

As long as these acts carry the torch, that’ll be no problem.