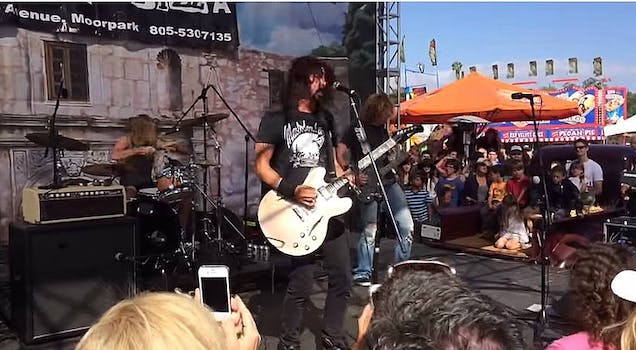 What happens when you're expecting a band called Chevy Metal and instead you get the Foo Fighters?

Imagine attending a concert for a band you’ve never heard of and instead getting one of the biggest bands in the world.

That’s what happened last weekend when the Foo Fighters, using the alias Chevy Metal, played a county fair in California. As usual, the Dave Grohl-fronted band rocked it hard, playing covers of The Knack’s “My Sharona” and AC/DC’s “Let There Be Rock.”

OK, it wasn’t the full Foo Fighters. Grohl, guitarist Chris Shiflett, and drummer Taylor Hawkins were there, but bassist Nate Mendel was not, replaced by Wiley Hodgden on bass while Rami Jaffee played on keyboards.

But Chevy Metal—Hawkins’ semi-regular cover band that he plays in with Hodgden and Jaffee—took its gig at the Conejo Valley Days in Thousand Oaks, Calif., very seriously. The band played 18 songs during its set, and every single one of them was a cover.

Seriously, though, how lucky are the people at this concert? You could buy a fried Twinkie and watch three-quarters of the Foo Fighters play covers of Van Halen, Billy Joel, and the Rolling Stones. What more could you want i life?