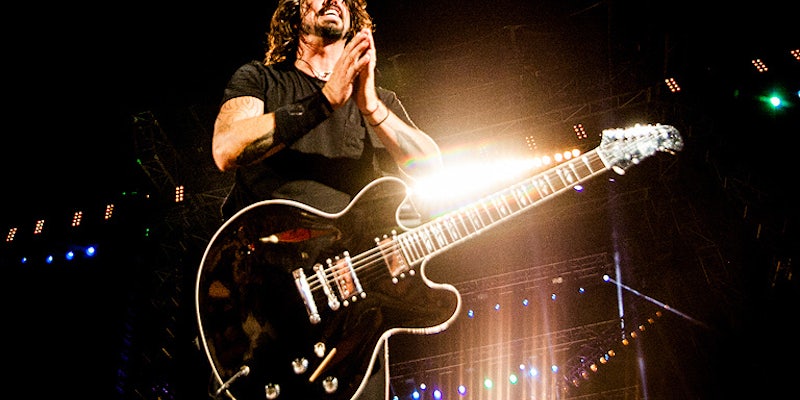 Why the Foo Fighters’ hiatus is exactly what the band needs

The band needs to look to Hulk Hogan for guidance.

As drummer Taylor Hawkins said in an interview with Artisan News in January that, in turn, was published on YouTube on Wednesday evening, the Foo Fighters are going on indefinite hiatus. Hawkins said the decision “was not because we don’t love each other, or don’t want to make music together … We did so much in the last five or six years. We as a band could go into the studio tomorrow and have just as much fun as we ever had, but I think the world needs a break from us for a little while.”

But for those hoping the hiatus would last into infinity, the band released this video on its YouTube channel on Wednesday night (you’ll have to wait until the end to see the answer).

That last part of Hawkins’ statement, though, is probably true. On the band’s last tour, it seemed like the Foo Fighters were making a video go viral every night, and only rarely did it have anything to do with the band’s music: Frontman Dave Grohl broke his leg and returned to the stage triumphantly that same evening; some dude from Canada sang a Rush cover with the Foo Fighters and upstaged the band in front of thousands of people; the band put together one of the better Ice Bucket Challenges we saw.

There was the Sonic Highways docu-series on HBO. There was the surprise EP released for free on iTunes. There was the drum battle with the Muppets’ Animal. There was Grohl playing a Beatles cover at the Academy Awards and making sure the deaths of Motorhead’s Lemmy Kilmister and Phil Taylor were properly recognized at the Grammys.

Grohl and the Foo Fighters are everywhere, and in this Internet age, there’s no escaping them. The band is on our computers, inside of our phones, lodged inside our brains like a tumor that very well could be malignant. The Foo Fighters are, indeed, overexposed—this Facebook page says so, anyway—and it’s certainly the right move to step away for a while.

Go away for a while, and don’t do anything that will make us click another viral video.

But will the band stay away? It’s doubtful. It went on hiatus in 2012, but by the next year, Grohl and company were playing big concerts again. In 2014, the Sonic Highways album was released, and last year, the band couldn’t stop going viral even if it tried.

Yet, there is hope. Consider the Hulk Hogan approach: From 1984 to 1993, Hulk Hogan was the top superstar in the World Wrestling Federation, but by the end of his decade-long run, both Hogan and the company that employed him needed a break from each other.

So, Hogan went to Japan and wrestled there for a while. His fans in this country didn’t see much—or any—of Hogan. And then he returned to World Championship Wrestling, his old boss’s competitor. It was like a chair shot to the back of the head, and it worked for Hogan, who extended his wrestling career for another two decades afterward.

(It must be noted that the move also worked for the WWF, now the WWE, which could move on without the aging superstar who had become too powerful backstage and which needed new blood to fill the pay-per-view main events.)

The Foo Fighters need to be like Hogan, minus the racist rants and sex tapes, of course. Go away for a while, and don’t do anything that will make us click another viral video. Give us some space so we don’t break up with you for good.

In times like these, you have to learn to let us live again without you, so we can welcome you back in a year or two or three. Let us breathe, make us miss you. And if all that fails, just go ahead and hire Phil Collins as the new lead singer.

H/T Consequence of Sound | Photo via Elisa Moro/Flickr (CC BY 2.0)