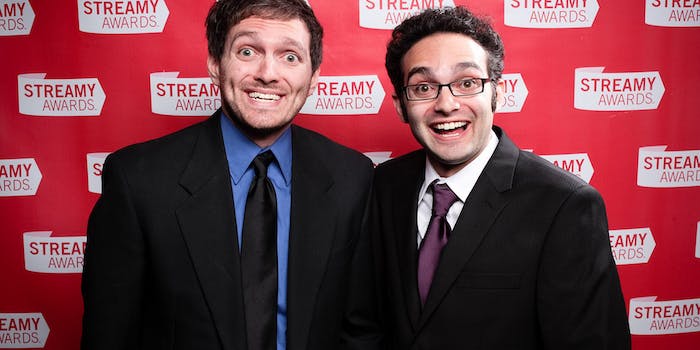 The Fine Brothers capture more than just a reaction

Quizzing kids, teens, elders, and fellow YouTubers, the two capture a rare glimpse into viral videos through the eyes of others.

The Fine Brothers are making a time capsule of the Internet, one video at a time.

The brothers, Benny and Rafi, are reponsible for the Emmy Award-winning React series, a set of nonfiction Web shows in which they show a particular group of people several trending videos and film their immediate reaction. Quizzing kids, teens, elders, and fellow YouTubers, the two capture a rare glimpse into viral videos through the eyes of others. It’s candid, enlightening, and often not what you would expect.

Just don’t expect the Fine Brothers to the cameras on themselves.

“We’ve always had a passion for championing people’s individuality and giving them a voice, so we wanted to make a show that could give people an outlet to share their opinions that could have an audience learn, laugh, and even cry along with them barring the topic,” the Fine Brothers told the Daily Dot via email. “This comes from our religious upbringing that hindered our ability to be who we wanted to become and a lot of our content scripted and unscripted reflect the idea of embracing who you are.”

Making content online since 2004, the Fine Brothers initially debuted Kids React on Oct. 16, 2010, featuring a cast of kids ranging from ages 5-13. It instantly caught on with viewers. Each week, the Fine Brothers introduce the kids to a new trend or national news story and discuss it with them, and almost all of the topics—Nyan Cat and Double Rainbow Guy to the 2012 presidential debates—typically coming straight from the YouTube comments .

It’s often been compared to Kids Say the Darndest Things, but Benny and Rafi don’t feel that the shows are similar. They’ve said that the React series are about conversation and not just laughing due to the kids not understanding a particular topic. You can also learn from them and realize that there’s a lot that other age groups might not know are occurring.

Kids React isn’t just entertainment. Whether it tackles a controversial topic or something lighter, it gets a conversation started.

Its popularity led the Fine Brothers to branch the show out to other groups. They started a new series with teens in November 2011, which included some of the cast who outgrew Kids. With an older cast, the two were able to cover more serious topics, such as the tragic suicide of teen bullying victim Amanda Todd.

“All of the serious topics always have hit us hard, especially when these amazing people we have been so lucky to cast onto our series allow themselves to open up and talk plainly about issues most people keep to themselves,” the brothers said. “The major issue of our time for young people is the Internet’s effect on bullying, social dynamics and more. The media, parents, and schools truly do not understand what is going on, how bad it is, and a lot more education is needed.”

After a few months, the popularity of Teens React led to Elders React and YouTubers React, the latter of which includes some of the most popular YouTubers, such as Smosh, Shay Butler, Shane Dawson, and Justine Ezarik.

With over 2.6 million subscribers, the Fine Brothers have steadily grown its following on YouTube. In October 2011, they became one of the original 100 channels that received a total of $100 million in funding from Google. They created MyMusic, which followed the antics of a transmedia production company. It received over 100,000 subscribers within the first day and received a record nine Streamy Awards nominations.

Yet, while the brothers won the 2012 Daytime Emmy for Best Viral Video Series for Kids React, they believe that successful wWeb filmmakers and companies still struggle for legitimacy from mainstream entertainment.

“Not a lot has changed [after winning the Emmy] other than realizing that there are shows on YouTube like React that can get similar if not better viewership than mainstream entertainment can,” they said.

They want to see more transparency in the future, no matter if it’s a partnership with a larger company or a YouTube network. They have spoken out against YouTube networks in the past, and while they joined Revision3 in September, they advise other YouTubers looking into that option not to join a network until they have enough of an audience to give them leverage for negotiation.

“We wish it wasn’t so old media big business, but it is,” they said. “You don’t need them, they need you, and you can become a partner through YouTube without them anyway.”

The Fine Brothers received four nominations for this Sunday’s Streamy Awards for their work on Kids React and MyMusic (including two Audience Choice Awards). In fact, given that the Streamys announced the winners in 19 categories on its website Wednesday, they’re  already winners; Kids React claimed the award for Best Non-Fiction or Reality Series.

For the Fine Brothers, the success of their operation boils down to honesty.

“Even when you look beyond the ultra serious subject matter, you can find elements of deep discussion in almost every episode of the series which is part of what these shows are all about and is what has made them successful—which is shedding light on tough issues and getting a conversation started, something we don’t do nearly enough,” they noted.

“We handle the topics with objectivity and care in hopes to connect with the viewers and have it leave a lasting resonance.”

Photo via The Bui Brothers/Flickr