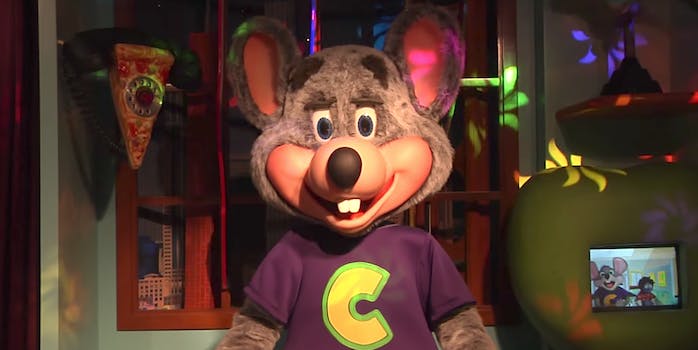 'This motherf**ker was playing up to 5 sets a night all over the country simultaneously.'

Last week, Chuck E. Cheese announced that its animatronic animal band was being removed “from select locations” while the company decides whether to phase them out entirely. Over the weekend, an unexpected rock star wrote them a moving tribute.

Father John Misty took to his Facebook page to share a heartfelt reflection on the iconic animatronic group and one special mouse in particular: Charles Entertainment Cheese.

“Having been a professional musician for a few years now, I can appreciate firsthand not only the strain of trying to sustain a flow of creativity for so long but the rigorous, pretty unexotic feat of physical endurance just getting through a few hundred shows a year…is,” he wrote. “When I consider that this motherfucker was playing up to 5 sets a night all over the country simultaneously I am reminded that, yes, it can be done, and that just by getting on that stage every night and leaving everything up there, I am part of lineage, of a collective imagination that spans the generations.”

As a touring musician, Josh Tillman, the trolly songwriter behind Father John Misty, said he had respect for the showmanship the robots have modeled over the years and cited them as a source of inspiration. “How he maintained that smile on his face, playing so consistently and with such little flash (even though I’m sure some nights he just wanted to stretch out and make it all about himself) is beyond me. Don’t forget: this man’s middle name was literally ‘Entertainment’.”

I typically don't eulogize over social media, but the shock and sadness I feel over losing this artist compelled me to…

It’s good to know that even if these rock legends do retire, they’re getting the praise they deserve while they’re still around to read it.