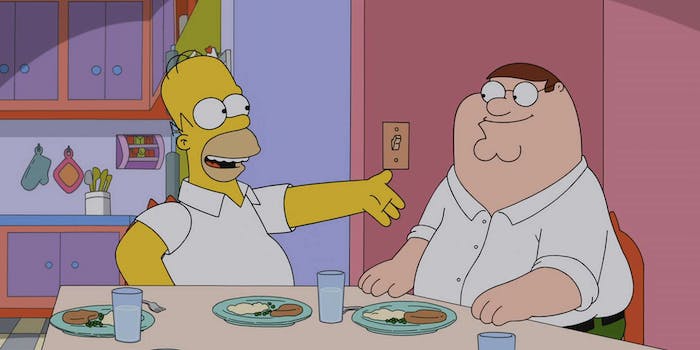 Quahog meets Springfield in "The Simpsons Guy," which will premiere Sept. 28.

Asking someone whether they prefer Family Guy or The Simpsons is a bit like asking if they prefer the Beatles or the Rolling Stones: you can like both, but you must demonstrate a strong allegiance for one over the other, and your choice is nothing less than a prism into how you see yourself and the rest of the world.

But for those of you who do genuinely enjoy both shows, and have always dreamed of watching Bart and Stewie make crank calls to Moe’s together, Fox has a gift for you: a Family Guy–Simpsons crossover episode, in the form of the Sept. 28 season premiere “The Simpsons Guy.” On Saturday, Fox premiered a five-minute teaser of the episode at Comic-Con, which you can watch over at Entertainment Weekly.

But if you’re hungover and don’t have enough energy in your index finger to click on the link, here’s a quick summary: The Griffins end up in Springfield by accident. Peter and Homer immediately bond over a shared love of donuts, until Homer discovers that Peter’s beverage of choice, Pawtucket Patriot Ale, is actually a ripoff of Duff Beer—a not-so-thinly-veiled reference to similar allegations made by Simpsons fans against Family Guy.

The teaser is basically what you’d expect, combining the visual styles and tones of both shows. (There’s also a rape joke barely two minutes into the teaser, which is par for the course for Family Guy). But for those longtime Family Guy and Simpsons devotees, it looks like it’ll be a lot of fun—though I, for one, am more excited about the Bob Belcher cameo than anything else. Bob’s Burgers for the win.