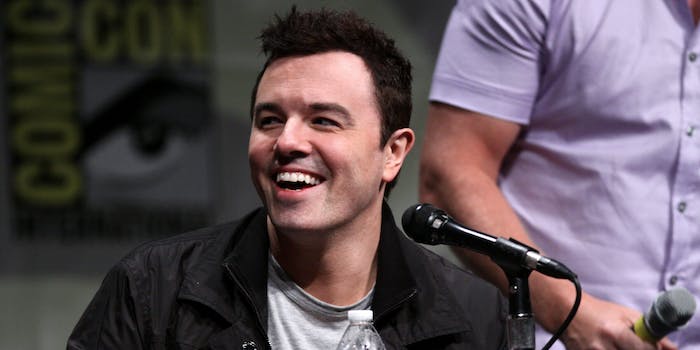 'That was a rumor I had actually not heard.'

Family Guy creator Seth MacFarlane came clean about the show’s 13-year-old Kevin Spacey joke that resurfaced in light of sexual assault reports made against the actor in October.

The joke took place in a 2005 episode, when Stewie runs naked through a mall and screams, “Help! I’ve escaped from Kevin Spacey’s basement!” The joke came under scrutiny after actor Anthony Rapp said that Spacey sexually assaulted him at an apartment party in 1986 when Rapp was 14.

At a Television Critics Association Winter Press Tour panel last week, MacFarlane said he was unaware of the rumors surrounding Spacey at the time of the episode.

“I don’t remember who pitched the joke,” he said. “I remember when it was pitched… that was a rumor I had actually not heard and other people in the writers’ room had. And it had to be sort of explained to me: ‘Oh, there’s this rumor that’s going on.’”

Neither Spacey nor fellow executive producer Alec Sulkin could remember who came up with the joke. But because the rumor was public, it was apparently able to pass Fox’s Broadcast and Standards department, according to Sulkin.

“It’s one of the things in terms of Standards where if they heard the rumors, as we have, then they’ll allow it,” he said.

Executive producer Rich Appel echoed his partner’s sentiment. “That’s one standard — if there’s some rumor out there that’s been public,” he said. “The other one is if it seems outrageous and no one could possibly believe it’s true, and some of those have come to pass, too. When they were aired, you thought, ‘Well, this is never going to happen.’”