No, your cell phone doesn’t have a name

But on Facebook, everyone has a number—and that's what's behind the latest cool trick people are sharing.

Facebook users are excitedly passing around word of a bizarre, hidden feature.

“Your cell phone has a name!” reads an image, along with instructions for how to turn your phone number’s last three digits into a real human name on Facebook. It’s been shared 18,000 times this week, and 4,000 of those came in the past twelve hours.

Never mind that it would be your cell phone number that has that name. This is just a way of showing off that most numbers, when used with this formula, will call out a particular Facebook profile.

The formula you enter on Facebook is @[X:0], where X stands any number, at least up to ten digits long. Contrary to the image’s suggestion, not every number works. You can type it into any comment field on the site. (It works exactly the same way as when you type the character “@” and a friend’s name you want to mention.) 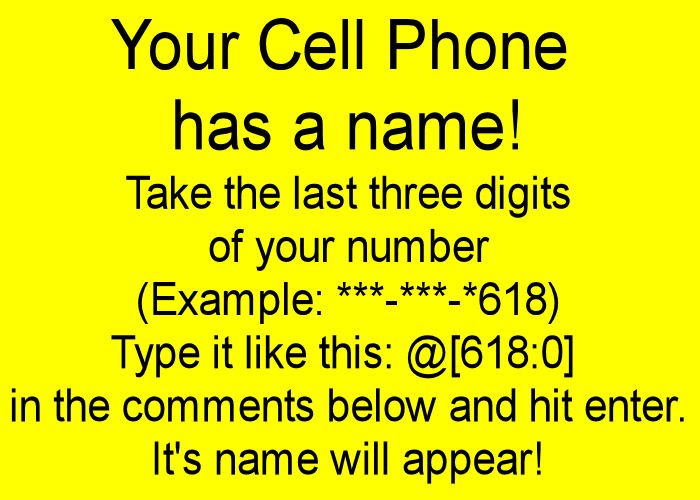 A Facebook representative told the Daily Dot she had no idea why this particular hack exists, or why it works.

The theory some are advancing—which, despite being posted on Yahoo Answers, appears to be accurate—is that the number refers to the unique numeric ID in a user’s profile. (If you know this number, you can get to the user’s profile by typing facebook.com/X in your browser.) The names associated with the smaller numbers, therefore, are Facebook’s first users.

You can test out yourself (we promise it won’t hurt):

Click your own profile, and note the string of numbers at the end of the URL. That’s your ID number.

Hit enter. Your name should show up.

By the way: the smallest number that works? That would be @[4:0]—Facebook founder Mark Zuckerberg. Sure enough, that’s his user ID, too.