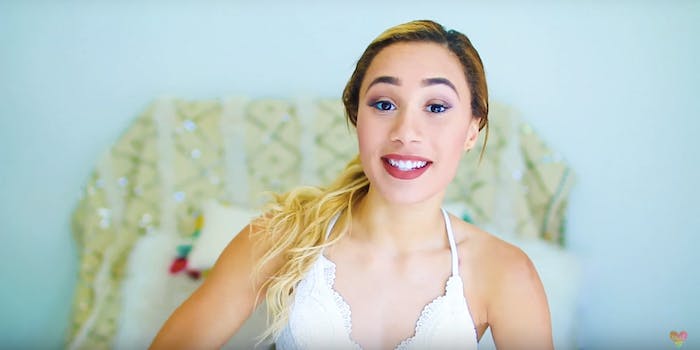 #WCW Eva Gutowski could be YouTube’s next Bethany Mota

Eva Gutowski has gained 22.5 million views on her YouTube channel since June.

This July, alongside YouTube heavyweights Ryan Higa, PewDiePie, and Rosanna Pansino, quirky beauty guru Eva Gutowski (MyLifeasEva) was named a YouTube “Famechanger” by Variety. Now, I pride myself with being abreast on all YouTube news—I mean, how else am I going to make a killer Matty B Raps jokes when he releases a new track?—but looking at this list, I felt completely thrown by Eva’s presence: Who was this girl who had added 1.6 million subscribers to her channel since March? Had I become so set in my Gregory Brothers and Casey Neistat ways that I couldn’t spot emerging talent a foot away?

It would be easy to dismiss Eva as just another 20-something beauty guru trying to make a splash online. But that would be a mistake.

The California native is a force to be reckoned with, blending her passion for all things beauty, style, and DIY with a refreshing and relatable dose of awkward comedy. In just four years, Eva has gained an audience of over 3.6 million subscribers and continues to gain close to 80,000 new subscribers a week. Since June of this year, the YouTube star has tallied over 22.5 million views on her channel, making hers one of the fastest-growing channels of this year.

In her profile with Variety, Gutowski shares that her secret to success has been “taking a lot of time to understand what my age group wants. It’s kind of like browsing the Internet for hours and hours late at night, but giving it to [viewers] in one YouTube channel. No one else is giving it to them in that way.”

Browsing through her top videos—“High School You vs. Child You,” “Real Morning Routine,” “DIY Room Decorations for Cheap”—and the millions of views she receives on each, it’s safe to say Gutowski’s personal formula is not only working; it’s also earning her notice outside the platform. Along with being nominated for a Teen Choice Award, Eva is also branching into longer-form content and joining fellow YouTubers for the Girls Night In tour.

So should you be in need of some decorating inspiration—her living room is a trying-to-be-an-adult-but-not-quite-there-yet girl’s dream—or a few tips for the perfect “you”-inspired party outfit, MyLifeAsEva is just the fashion-forward friend you need.