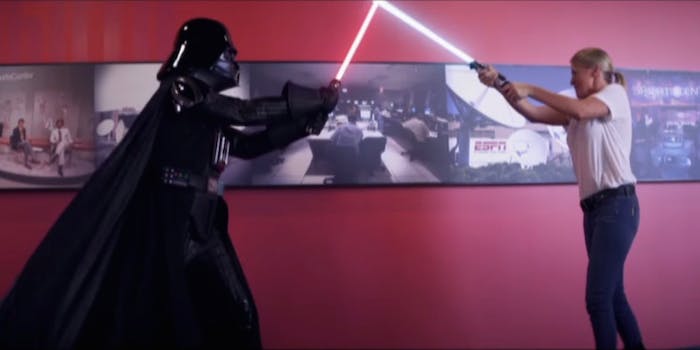 Sports fans are about to feel the Force for the holiday.

ESPN 2 is about to get a major boost from the Force this Halloween when it airs a special half-hour Star Wars episode for the holiday. According to The Hollywood Reporter, SportsNation hosts Michelle Beadle, Max Kellerman, and Marcellus Wiley will be entering the galaxy far, far away in a big way on Thursday’s show.

Not only is ESPN 2 redecorating the set so that it looks like the iconic Millennium Falcon, but the show will also feature characters from the Star Wars franchise like Darth Vader, R2-D2, C-3PO, Chewbacca, Yoda, Boba Fett, and Han Solo. Even a brand new character from the universe, Star Wars Rebels’ grumpy droid Chopper, will stop by.

This is SportsNation, of course, so you can also expect them to show some Star Wars-inspired sports clips. It’s anyone’s guess who will win “Best Jedi Mind Trick” or “Most Unstoppable Skywalkers.” Throw in the fact that this special will also debut an exclusive clip from a future Rebels episode, and it’s clear that Disney is going all-out to promote its newest franchise on the Mouse-owned sports channel. You can watch the opening of the special in the video below.

SportsNation’s Star Wars Halloween episode will premiere on Thursday at 7:30pm and re-air on Friday at 3pm.