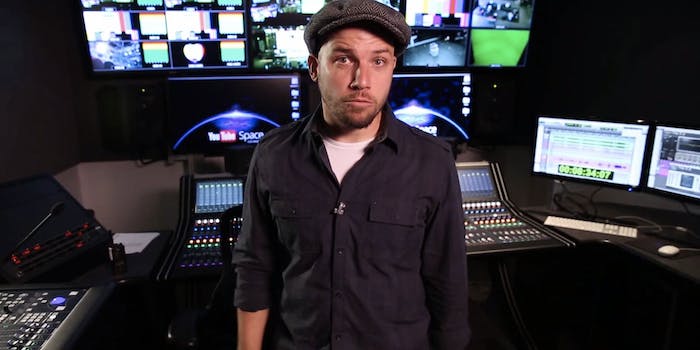 Los Angeles, London, and Tokyo link together to create a live experience for fans.

YouTube is all about breaking the mold for entertainment, so when prominent YouTuber EpicLLOYD came to the company with the idea of a live, international improv show, it was a natural fit, if a tricky one to accomplish.

“One of the hardest things to capture about improv comedy is that live risk feeling that you’re right there in the room,” EpicLLOYD told the Daily Dot in advance of “Off the Top” going live today at 2pm CT. “As the technology grows, you can manufacture that more.”

EpicLLOYD conceptualized the event after YouTube put a call out to creators to come up with new and interesting ways to use both the YouTube Space Los Angeles and the technology it provides.

“I do live comedy all the time, and I own a comedy club in Santa Monica,” EpicLLOYD said. “We did an improv show at Maker Studios about a year and a half ago where we took improv suggestions from social media. It was a little bit piecemeal, and [YouTube was] offering it on a bigger scale.”

EpicLLOYD is best-known in the YouTube community for his Epic Rap Battles, and he promised they’d be a part of the livestream event, saying the IRB (Improv Rap Battles) would incorporate audience suggestions and freestyle rap. He’s also inviting some of online media’s biggest names to be guests, including YouTuber Timothy DeLaGhetto and Vine star Jessi Smiles.

The greatest challenge the event faces will be the technology: They’re using higher-tech equipment as provided by YouTube and thus interacting with crews with backgrounds in television instead of YouTube, plus they are linking up with YouTube Space London and YouTube Space Tokyo live during the event. Each city will house a team of performers that EpicLLOYD described as “raw, straight-up improvisers.”

“Our Tokyo actors will be doing improv comedy at 3 in the morning,” explained EpicLLOYD, who handpicked each performer, including the overseas ones, via a very non-traditional method: robot. “There was this robot I could control from my laptop and it had a camera for a face so they could improvise at me to audition. It was kind of crazy.”

Although the event has asked fans for suggestions on social media, EpicLLOYD says he’s not looking at the replies himself.

“We have somebody whose specific job on the project is to gather these suggestions and prepare them for the show,” he said. “I’m in the show, so I don’t want to see any of these suggestions; otherwise, I can’t improvise. People love stuff that they can interact with.”

The event begins Aug. 1 at noon PST on EpicLLOYD’s channel and continues as a livestream through Saturday, Aug. 2. It will also live on after the event as segmented episodes that EpicLLOYD will promote across his various channels, including the channel for his Santa Monica comedy club, TheWestSideComedy.

“One of the main goals for the production is to increase subscribers on [his comedy club channel],” he explained. “It’s kind of an experiment to see what a live event can do for a brick-and-mortar business.”