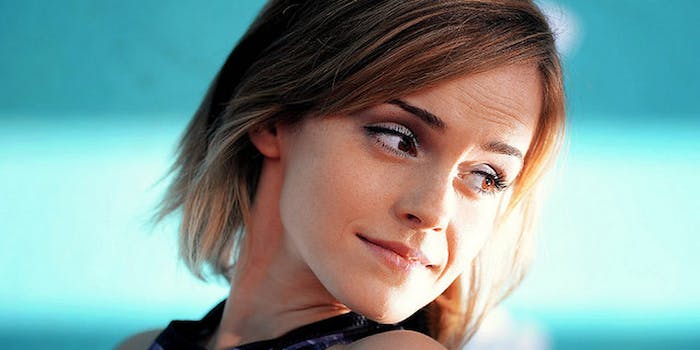 Watson is now the face of HeForShe, a gender equality campaign.

Emma Watson was in New York City yesterday to give a speech as the UN Women Goodwill Ambassador. More specifically, the Harry Potter star focused on a new online gender equality campaign called HeForShe, which is hoping to “galvanize as many men and boys as possible to be advocates for gender equality.”

Her speech touched on a lot of issues women face in real life, and online, and she spoke about how feminism’s become a dirty word:

I was appointed six months ago and the more I have spoken about feminism the more I have realized that fighting for women’s rights has too often become synonymous with man-hating. If there is one thing I know for certain, it is that this has to stop.

For the record, feminism by definition is: “The belief that men and women should have equal rights and opportunities. It is the theory of the political, economic, and social equality of the sexes.

She also offered a timeline for her own relationship with feminism, which was shaped in part by the entertainment business:

I started questioning gender-based assumptions when at eight I was confused at being called “bossy,” because I wanted to direct the plays we would put on for our parents—but the boys were not.

When at 14 I started being sexualized by certain elements of the press.

When at 15 my girlfriends started dropping out of their sports teams because they didn’t want to appear “muscly.”

When at 18 my male friends were unable to express their feelings.

I decided I was a feminist and this seemed uncomplicated to me. But my recent research has shown me that feminism has become an unpopular word.

The UN has been actively seeking out celebrity faces for its causes: We’re living in an age where Leonardo DiCaprio is now the UN’s Messenger of Peace, with a focus on climate change. You can watch her whole speech here:

The UN is hoping to get 100,000 men to join the HeForShe cause by next September, but it will be interesting to see if this movement does galvanize people beyond hashtag activism. Towards the end of Watson’s speech, she quotes writer Edmund Burke to drive her point home: “All that is needed for the forces of evil to triumph is for enough good men and women to do nothing.”