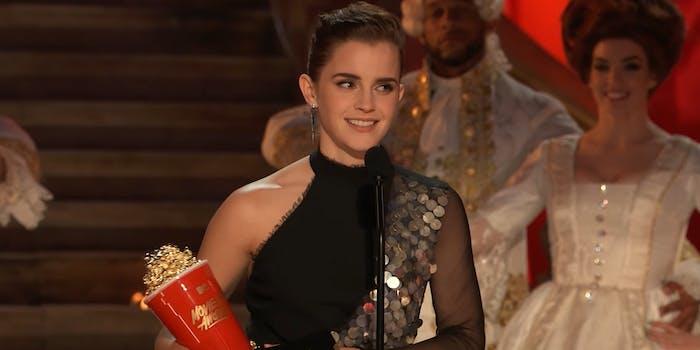 It was the first year MTV got rid of gender categories.

Emma Watson became the first actor to win a gender-neutral award for acting at the MTV Movie and TV Awards, and she acknowledged the historic nature of the award itself in her acceptance speech.

MTV announced earlier this year that it got rid of gender division categories, which meant that there would no longer be separate acting categories for men and women. Anyone could be nominated under the new “Best Actor” categories for television and film. The movie nominees included Watson for Beauty and the Beast, Get Out’s Daniel Kaluuya, Hailee Steinfeld, Taraji P. Henson, Hugh Jackman, and James McAvoy.

“The first acting award in history that doesn’t separate nominees based on their sex says something about how we perceive the human experience,” Watson said. “MTV’s move to create a genderless award for acting will mean something different to everyone. But to me, it indicates that acting is about the ability to put yourself in someone else’s shoes. And that doesn’t need to be separated into two different categories. Empathy and the ability to use your imagination should have no limits.”

She thanked Billions star Asia Kate Dillon, who identifies as gender non-binary and presented Watson with the award, for educating her “in such an inclusive, patient, and loving way.”

Watson turned to Beauty and the Beast and praised the virtues that Belle represented such as her passion and curiosity in the face of an alienating village.

“I’m so proud to be a part of a film that celebrates diversity, literacy, inclusion, joy, and love the way that this one does,” Watson said.

You can view the complete list of winners here.