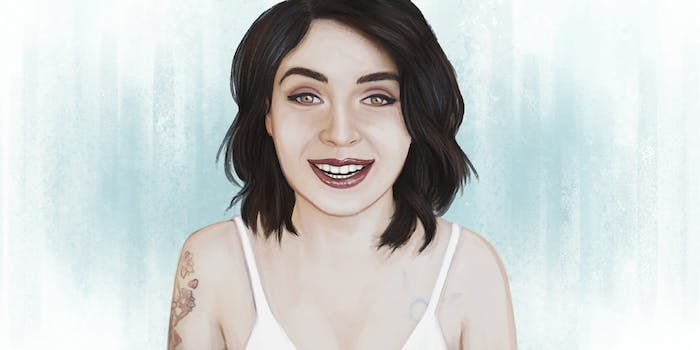 With a new EP and book on the way, Blackery is leaving a mark on YouTube.

I found Emma Blackery exactly when I needed her most. As a fellow introvert, our personality types are looked down on for being “loners,” “people haters,” or “too independent.” And I’ll admit, even as someone who’s self-assured, it can sting when it hits me on the right day, in the right spot. It’s in these moments I take a step back and think of musician and vlogger Blackery, whose biting comedy and self-deprecating commentary has empowered viewers across YouTube.

In just five years, Blackery has proven herself a digital chameleon. Trying every type of hair style and video genre, Blackery maintains three different channels: Emma Blackery (for her music and comedy sketches); Vloggery (for vlog-driven conversations); and Birdy Boots (gaming). She originally opened her main channel as a space to share her music, but much like her personal evolution, Blackery has since turned her YouTube presence into a career. Now her channel is filled with sketches about social media, honest chats about mental illness, sex education, body image, and the fallout that can come with being a Harry Potter-loving introvert. Entirely self-employed by the age of 21, Blackery continues to pursue music full time as well. Her new EP Magnetised was self-released this month, and announced tour dates across the U.K. and Ireland. She’s also writing a book, somewhere in there.

“Emma, herself, is the unique thing she provides the YouTube community,” says Earnest Pettie, a Emma Blackery superfan and lead on YouTube’s Culture and Trends team. “She’s a thoughtful, funny, ferocious feminist unafraid of having an opinion while being fully aware that she’s learning as she goes along. She’s the kind of voice you want around because she gives a green light to others to be bold without being afraid of making mistakes.”

Last year Blackery and her longtime boyfriend Luke Crawford (also a YouTuber) made news for doing the most shocking thing of all: Staying friends after their breakup. This is the perfect example of how Blackery approaches any situation. No matter what she’s filming about—her decision to stay friends with her ex, traveling alone, using fan fiction to overcome anxiety—she doesn’t shy away from owning her opinions. As trolls take to YouTube comments like ants on a day-old watermelon, embracing this is shockingly brave. Last year, when Louis Cole’s controversial vlog from North Korea won the Boncas’ travel video of the year award, Blackery argued that Cole’s filming of North Korea, without context of its history and atrocities, gave a false understanding to his millions of viewers.

It’s figures like Blackery who are expanding our idea of what women can accomplish on YouTube. With video genres such as comedy and music, the demographics still lean heavily male. What Blackery is doing, and all by being herself, is showing other women it’s possible to infiltrate and own scene online.