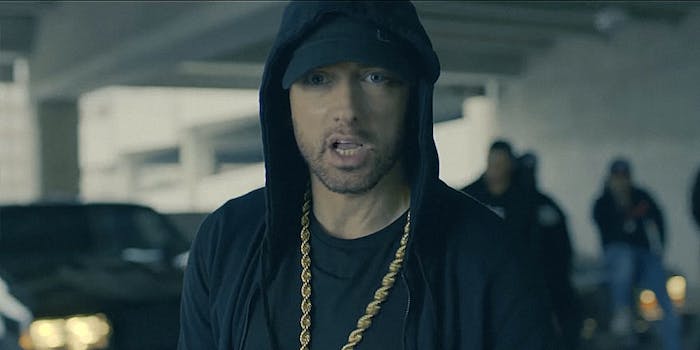 He called out Trump and his fans who support him directly.

Rapper Eminem delivering a searing, nearly five-minute freestyle rap directed toward Donald Trump on everything from how he handled Puerto Rico after Hurricane Maria to his treatment of war veterans to an accusation of racism during the BET Hip Hop Awards Tuesday night.

Filmed in Detroit on Friday, Eminem name-checked the white supremacist protests in Charlottesville, Colin Kaepernick, Steve Bannon, Barack Obama, Hillary Clinton, and more in a freestyle he titled “The Storm.” He also called him out for getting distracted over the NFL protests while ignoring disasters like Puerto Rico.

The FULL verse that EVERYBODY is talking about! @eminem BODIED THIS! #HipHopAwards pic.twitter.com/zoS0wEwjQF

But at the very end of the freestyle he rapped directly to his fans, telling them they’ll need to choose: him or Trump.

“And any fan of mine/who’s a supporter of his/I’m drawing in the sand a line/you’re either for or against,” he rapped. “And if you can’t decide/who you like more and you’re split/on who you should stand beside/I’ll do it for you with this.”

He then flipped off the camera before adding a “fuck you” straight to the camera.

Though it’s certainly not the first song or rap calling Trump out directly, Trump has yet to respond with a tweet or, god forbid, a freestyle response of his own.