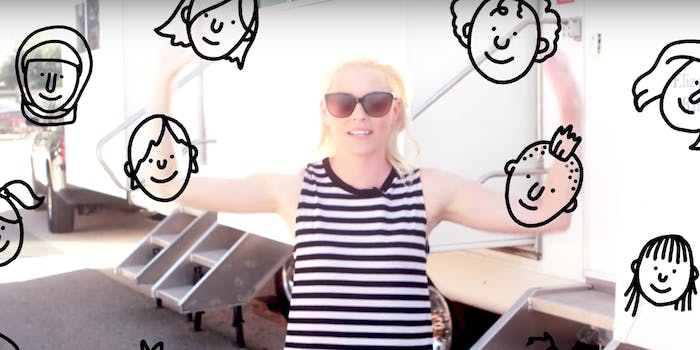 The program will take place worldwide.

A new partnership between YouTube and Elizabeth Banks aims to combat underrepresentation in the entertainment industry for female comedy creators.

Called simply the “Women in Comedy” program, Banks and YouTube will hand-pick 100 winners to be part of a 12-week mentorship at YouTube Space in nine cities around the world—Los Angeles, New York, Toronto, Rio, Paris, Berlin, London, Tokyo, and Mumbai. The program will provide aspiring female YouTube comedians access to “dedicated production sets, provided crew, mentorship from Banks herself, and more than 50 specialized workshops and events.” So basically anything you’d need to film the sketch of your dreams—and maybe collaborate with some new friends.

Empowering and encouraging the next generation of comedians is a cause that’s close to Banks’ heart. In 2016, the Wet Hot American Summer star and Pitch Perfect director founded a platform for female comedians, WhoHaHa, which works to foster careers for women in all branches of comedy. The new YouTube partnership seems like an effort to branch the supportive aspect of WhoHaHa’s mission with the creative work that’s already being generated over on YouTube.

In an announcement video for the project, Banks cited several statistics from the Center for the Study of Women in TV and Film as her inspiration for the initiative. According the their findings, women accounted for only 27 percent of behind-the-scenes television roles last year, and only 17 percent of all TV, streaming, and film titles were directed by a woman.

Banks is hoping to boost those numbers:

“It’s not only important but essential for women to have a platform to be able to share their voices and creativity,” Banks said in a statement. “That’s why we’re excited.”