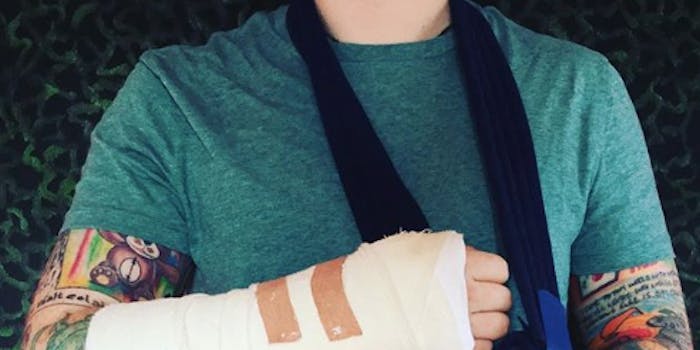 Ed Sheeran hit by car while biking in London

Upcoming shows may be impacted.

Ed Sheeran is in a cast Monday after getting into a bike accident in London.

The 26-year-old pop star was reportedly riding his push-bike when a vehicle knocked him down, breaking his arm. Sheeran was rushed to the hospital and is said to be “in a stable condition,” but there’s no word yet on whether the accident will affect his upcoming Asian tour.

The singer posted a photo of his cast and sling to Instagram early Monday, with the caption: “I’ve had a bit of a bicycle accident and I’m currently waiting on some medical advice, which may affect some of my upcoming shows. Please stay tuned for further news. Ed x”

Ive had a bit of a bicycle accident and I’m currently waiting on some medical advice, which may affect some of my upcoming shows. Please stay tuned for further news. Ed x

If his arm is—in fact—broken, playing the guitar every night would definitely be a lot of stress on his bones. And as the Mirror points out, Sheeran plays his guitar right-handed, which appears to be the arm most impacted by the accident.

The first date of Sheeran’s Asian tour is scheduled for October 22 in Taipei, followed by appearances in Osaka, Seoul, Tokyo, Hong Kong, the Philippines, Indonesia, Singapore, Malaysia and Thailand. His last 2017 dates are scheduled for November 19 in Mumbai, India, and November 23 in Dubai.