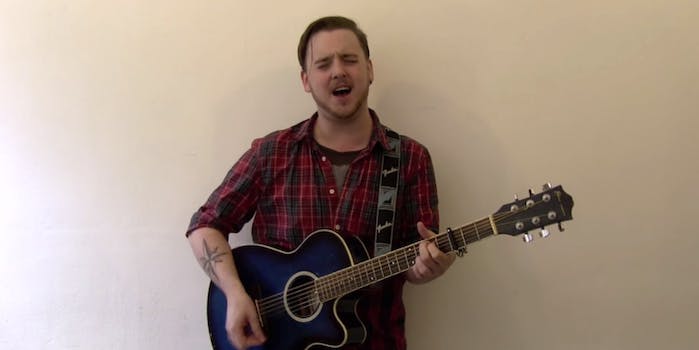 After abuse allegations, YouTube star returns to face the music

Ever since sex abuse allegations broke out last March against Tom Milsom, Alex Day, and nearly a dozen other personalities on YouTube and Tumblr, those accused have largely stayed off social media, and the communities have started a larger conversation about consent and how fans and creators should coexist online.

But what happens when those accused (and those who admitted to being abusers) finally try to rejoin the communities they rocked?

Ed Blann, a musician better known as Eddplant online and one member of Chameleon Circuit, was one of the earlier personalities to be accused of sexual and emotional abuse toward a fan. After the accusations came out, he addressed it on Tumblr.

In the now-deleted post, he admitted that he had “engaged in sexual activity” with a fan; the last time he did so, he pressured her even after he had “been repeatedly told to stop.”

“Over the course of those eight months I treated her appallingly, manipulated her, and behaved in an extremely misogynistic way towards her,” Blann wrote.

He apologized for his actions. Afterwards he removed himself from attending upcoming YouTube conventions, and his music was taken off DFTBA Records. At the time, he noted that he would be taking a break from social media and YouTube. His most recent tweet (that isn’t a reply) is a link to his Tumblr post.

In case you’re following me and you’re not aware, this happened last year https://t.co/MgYJUAOTVQ just so we’re all on the same page.

It’s a video of Blann singing an original song called “Inhuman Nature,” in which he sings about flaws and regrets and how he’s defined by his actions. It includes such lyrics as “I won’t let go of what I’ve done / I’ll let it shape what I become” and “I’ll chase the storm of hate and lost respect / ‘til I’m a better man.”

“By my actions I’m defined, so let the words I write remind me I am capable of hurt,” he sings at one point.

Some of Blann’s fans may see “Inhuman Nature” as his mea culpa, but there are plenty of people who think that Blann shouldn’t be posting anything or trying to settle back into his position of power in the community.

When the scandals broke out originally and several people came forward with accusations, they received a lot of support from the YouTube and Tumblr communities, but others victim-shamed and tried defending their idols. The communities were simultaneously acting as a safe haven full of supporters and a place ripe for anonymous hatred. Blann’s video is now caught in a similar crossfire.

The comments on the video, which currently has more dislikes than likes, is a mix of commenters telling viewers not to support Blann and his supporters saying that he deserves a second chance.

“This is actually a really good song, with a good message?” Jesseekify wrote. “He’s not talking about how much he hurts, he’s literally talking about how he’s trying to become ‘a better man’. A lot of people seem to discourage this song but I approve of it.”

The former group of commenters suggest that if he was sorry for the abuse and what he did, he’d “never even consider returning to a community that should be a safe place for his victims.”

But his video also is also triggering for his victims; one commented on the video about how it’s hindering her recovery.

She later wrote in a Tumblr post that Blann deleted the comment. It’s currently back up on YouTube, and it’s unclear if the comment just temporarily disappeared or if it was removed (and if so, if it was by Blann).

“You can say ‘he owes his audience nothing’ – but can you honestly say that he owes me nothing?” she wrote. “Do I not deserve just a little bit of peace? Do I not deserve to have him listen to my words and take into account just how much he’s ruined my life? All I want is to be left alone, to stop having panic attacks. To stop reliving everything over and over.”

She goes on to describe in detail the abuse that she went through with Blann, something she’s still trying to recover from.

“Before accepting him back just please please, remember what he’s done and remember that people are still hurting because of him,” she continued. “That in the song, he belittles raping me and ruining my life to just a simple regret that he has. That in the song he says he’ll use the experience of raping me and fucking over every girl he has ever been with to make him in to a better man.”

There are many, many negative comments toward Blann still on the video. But the alleged removal of his victim’s comments set off the YouTube and Tumblr communities, and people urged others not to go looking for the video or give Blann page views (and therefore, any possible ad revenue) by watching it.

“I think it’s entirely inappropriate to return to a community that you took advantage of and abused,” Morgan Paige said in a response to Blann’s return. “Especially considering there are teenage girls who are young and impressionable, who will be more willing to ‘give you a second chance’ and ‘forgive you’ even though your song wasn’t an apology.”

What may have also been telling for fans is that Day, who hasn’t made a video since allegations against him surfaced, liked the video.

here is all you need to know about @eddplant‘s latest video pic.twitter.com/LCPei1IMAo

Liam Dryden, Blann’s former Chameleon Circuit bandmate, was asked about the recent updates on Tumblr. While he initially wanted to remain silent for the sake of his friendship with Blann, he felt that he could no longer after finding out that Blann might have deleted his victim’s comments from the video.

“Do not buy into any ‘everyone deserves a second chance’ crap,” Dryden wrote. “So many people spout this like it’s an instantly redeeming Hail Mary but it’s just not a thing. Yes, almost everyone deserves the opportunity to improve themselves and start over, if they are willing and understand their transgressions; but when you burn your house down, you don’t sit in the ashes and try to piece them back together. You find another house.”

Dryden, like others, urged people not to seek the video—even out of morbid curiosity—and to remove any support for the creators who support Blann and other abusers who try to return to the community he took advantage of.

And he encouraged people to keep talking about it because while comments can be deleted from YouTube videos, “tweets and Tumblr tags can’t.”

Blann did not respond to the Daily Dot’s request for comment.