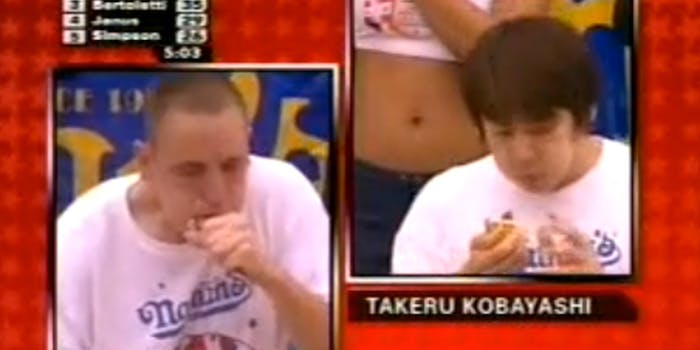 Throwing up at the Coney Island Hot Dog Eating Contest is as American as throwing up apple pie.

The July 4th holiday is as synonymous with shoving down hot dogs down your throat as it is with fireworks. And puking.

The annual Coney Island Hot Dog Eating Contest kicked off on Wednesday, with 30 red-blooded American competitors attempting to devour as many hot dogs as they can in 10 minutes. Defending champions Joey Chestnut and Sonya “The Black Widow” Thomas took top weiner positions in their respective brackets, and relished in all the glory.

Since we’re on a low-sodium diet, it’s best we just watch the five of the grossest hot dog-eating incidents of all time, and not partake. We still have another two months of swimsuit season.

Watch as Chestnut chows down 63 hot dogs to Kobayashi’s 62, and then Kobayashi throws up at the 5:05 mark. If you had any desire to participate in the competition, this will end that desire.

While there are no “famous” competitors in this one, some contestant is glad he is not well-known. Following the hot dog eating competition, one of the contestants lets out a steady stream of puke at the :14 mark and it lands on the other eater. Dying.

The Swedes one-up us and instead of your normal, plain tasting hot dogs, its spicy sausage that they shove down their throats. There is no direct vomit in the video but scroll to the 9:00 mark to watch the guy try to hold back his puke. That almost did it for us.

Not hot dogs, but equally great: Pittsburgh’s Tribune-Review captures a pierogi eating competition where the winner shoved down 51 of the potato filled dumplings in just five minutes. At the 5:00 mark, watch a determined competitor roll around on the ground, vomit and reconsider life, wondering why the hell he just partook in that.

5) Local man pukes, puts it back in his mouth

Taking one for the team, the guy in the green shirt pukes out some of his burger. It lands in his hand, AND THEN HE PUTS IT BACK IN HIS MOUTH. No, no, no. We’re done here.