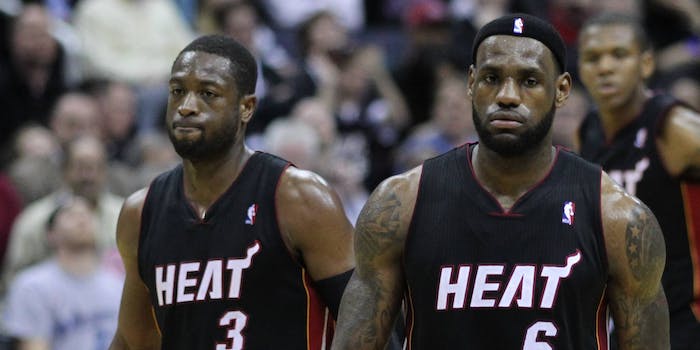 The Cavs just followed Dwyane Wade—could he be headed to Cleveland?

Rumors have swirled all day about the next move for Miami Heat shooting guard Dwyane Wade, who’s now an unrestricted free agent. He’s reportedly scheduled to meet with several teams, but one franchise is raising eyebrows with its social media mind games.

As the biggest free agent still on the board after Kevin Durant announced that he’s signing with the Golden State Warriors (resulting in a lifted curse from Lil B), Wade pretty much has his choice of where he wants to go. According to multiple sports reporters, Miami has offered him a two-year, $40 million deal. Wade has yet to publicly respond, but he’s looking for a $50 million deal and in the process several other teams including the Chicago Bulls, Dallas Mavericks, Denver Nuggets, and Milwaukee Bucks have expressed interest in signing Wade.

By Tuesday, reporters confirmed that Wade canceled some of those meetings with interested teams.

Dwyane Wade has canceled some free agent meetings with teams he'd set up with this week, sources said.

But some fans are now convinced that Wade is signing with the Cleveland Cavaliers—fresh after winning an NBA title last month—after the official account followed Wade and his wife, Gabrielle Union, on Twitter. (Wade also followed the Cavs on Instagram.) If Wade signed with the Cavs, he’d reunite with his former Heat teammate LeBron James.

Normally one account’s follow activity wouldn’t raise much attention, but when everything is a conspiracy in the making in the NBA, it matters to the fans. For them, the Cavs following Wade—a player on a rival team—matters.

Wade actually signing with the Cavs seems unlikely, and for a reason worth millions. The Cavs simply don’t have enough money available to negotiate a contract with Wade unless he takes a pay cut—and possibly James as well.

It's more money with the Nuggets or 3 million a year with the Cavs. I'm staring at Wade with my arms folded

Even if LeBron did that, they'd have to lose JR and they *still* could only offer Wade 7M. https://t.co/rEt8Bp4k6J

All the @cavs following Wade and Gabriel Union means (for now) is that their social media guy/gal deserves a raise!

We’re frankly no closer to finding out where Wade will play next (or if he’ll stay in Miami). In the meantime he’s getting a ton of new follows without having to do a single thing, so it’s already a win for him.

Huh? What do you mean? https://t.co/kV9zPuCdjr

Just in case Dwayne Wade has any eligibility left. pic.twitter.com/BLdEmy4Zi0