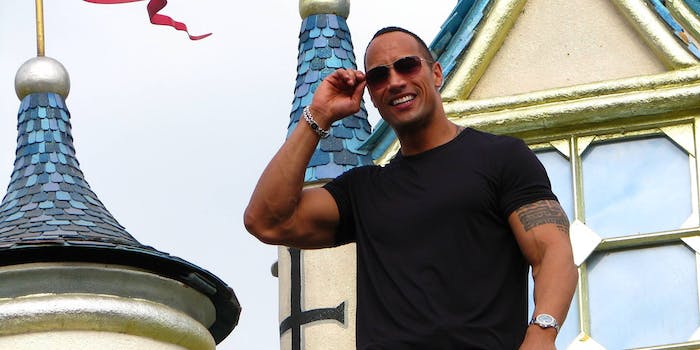 Which ‘Fast 8’ co-star is Dwayne ‘the Rock’ Johnson feuding with?

Judging by a juicy new Facebook post from Dwayne Johnson, trouble may be brewing on the set of Fast 8.

In a post about his final week filming the latest Fast and Furious movie, Johnson wrote, “There’s no other franchise that gets my blood boiling more than this one,” before hinting that he may be feuding with one of his co-stars.

Johnson begins by complimenting the crew, Universal Studios, and his female co-stars. Then things get ugly.

“My male co-stars however are a different story. Some conduct themselves as stand up men and true professionals, while others don’t. The ones that don’t are too chicken shit to do anything about it anyway. Candy asses. When you watch this movie next April and it seems like I’m not acting in some of these scenes and my blood is legit boiling – you’re right.”

The post finishes with a quick clip of him slamming a stuntman to the ground, along with the hashtag #ZeroToleranceForCandyAsses. Ouch.

For obvious reasons, people are very curious about who he might be talking about. His post implies that he had similar problems during other appearances in the franchise, meaning that it’s one of the recurring actors: Vin Diesel, Tyrese Gibson, Ludacris, or maybe Jason Statham.

However, some internet sleuths think he may be referring to newcomer Scott Eastwood, pointing to Eastwood’s use of “candy asses” in a recent interview with Esquire.

He literally used "CANDY ASSES." That is on purpose. DELIBERATE FUCKING SHIT. pic.twitter.com/PB5ohMuUtK

Since Dwayne Johnson has the public persona of a cheerful and hardworking Disney prince, you have to wonder what someone did to get on his bad side. On the other hand, he’s also a former professional wrestler, and very good at using social media. If anyone knows how to orchestrate a public feud for publicity purposes, it’s him. And with seven months to go before Fast 8 comes out, fans have plenty of time to speculate.