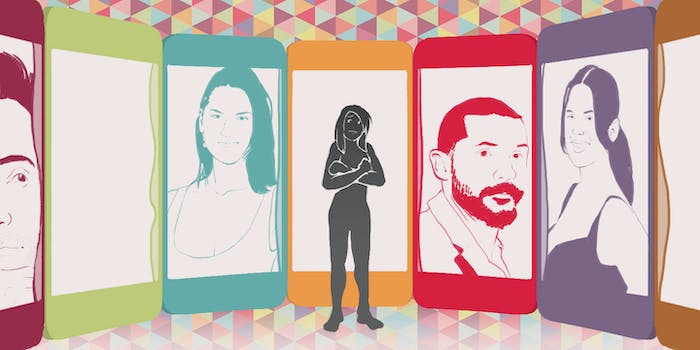 Life in a time of Dubsmash wars and lip-sync battles

The Internet has always been drawn to the dubbed performance; Dubsmash just made it handheld.

I don’t remember the first time I lip-synced, but I remember the most destructive. I was roughly 7 or 8, and I was obsessed with Hall & Oates’s album Big Bam Boom. I was deep in the chorus of “Method of Modern Love,” using my parents’ waterbed as a stage. I must have briefly left my body because I don’t remember feeling the ground give out. But I knew that suddenly my stage was very wet.

I thought about this moment the first time I used Dubsmash, the lip-syncing app that houses an array of audio clips from TV shows, movies, and songs, which users can film themselves reenacting. There, the focus is on users’ faces, for the most part. It’s a different take on the selfie. We’re filming ourselves mimicking a line from a movie, TV show, or famous speech; we’re becoming someone else for a bit, which is the essence of lip-syncing.

Lip-syncing in my parents’ bedroom allowed for some physical and creative freedom; it allowed me to let go and get lost. Dubsmash is pure performance. You’re aware of your movements and facial expressions because you’re staring at one of the many screens that fill our lives, at a guaranteed audience.

The Internet has always been drawn to the dubbed performance: There’s the Baracksdubs YouTube channel, Bad Lip Reading, and countless dubbed videos of politicians. Dubsmash just made it handheld.

Dubsmash’s founders—Jonas Drüppel, Roland Grenke, and Daniel Taschik—debuted the app in November 2014, after two false starts. According to TechCrunch, the founders met at a hackathon in 2012 and attempted to debut an app called Starlize in 2013, which would let users make their own music videos. But Grenke told TechCrunch that they “had the feeling that it was too complex for most users,” so the Berlin-based company regrouped and focused on making shorter clips that weren’t just limited to music.

Emma Stone won the Internet’s hearts in April 2014 with her Tonight Show lip-sync master class, proving just how infinitely shareable the clips could be.

The formula worked. In the last year, Dubsmash has become a great equalizer, especially for celebrities, and has been downloaded more than 75 million times, according to the company’s website. In January, Grenke said they hadn’t had issues with copyright infringement, and suggested that certain entities who might issue a takedown request would do well to work directly with them. The company also just raised $5.5 million in funding.

The app’s success dovetails rather conveniently with the popularity of Lip Sync Battle, a show born out of a popular segment on The Tonight Show. Lip Sync Battle, which debuted on Spike in April, was made to be circulated in bite-size viral bits the next day, just like Tonight Show clips. Emma Stone won the Internet’s hearts in April 2014 with her Tonight Show lip-sync master class, proving just how infinitely shareable the clips could be. It now has more than 61 million views. Paul Rudd’s appearance in February 2014 has more than 28 million.

The app, and shows like Lip Sync Battle, strive to make celebrities seem like you and me: They have a favorite song; they have a goofy dance they do. So-and-so destroyed/nailed/rocked that song. Can you believe it? And often, there is some degree of winking and nudging that feels a bit too well-orchestrated. It’s oh-gosh culture for famous people; it’s Anna Kendrick syndrome.

Lip Sync Battle has also faced criticism for erasing drag culture—a foundational and transformative aspect of lip-sync history—from the show. RuPaul’s Drag Race fleshed out the concept of a lip-sync “battle” for TV and exposed the high art of drag to the mainstream, but Lip Sync Battle was created by a straight white man, The Office’s John Krasinski. It doesn’t focus on craft or nuance like drag does; it puts Krasinski and Deion Sanders in dresses for laughs. And the concept isn’t new: Lip Sync Battle and RPDR were also both preceded by another lip-sync show, Puttin’ on the Hits.

But Casey Patterson, executive producer of Casey Patterson Entertainment, which produces Lip Sync Battle, wants us to learn something about our favorite celebs. She says giving actors the freedom to pick the song they perform was important to the show’s structure.

“We felt like really the best version of the show would be to learn more about celebrities through their musical choices,” she said. “So it’s just another way of getting to know these personalities that you love so much. You can tell that’s not the first time The Rock did Taylor Swift. When you saw Anne Hathaway do Miley [Cyrus], you knew she was a fan. They’re sort of these mini-tributes to the artist.”

That’s happening on Dubsmash, too. Hugh Jackman took a shot at Katy Perry (and Jim Carrey). Olivia Munn and Aaron Rodgers recreated a scene from The Princess Bride. Tom Hardy used the app to channel 50 Cent/the Punisher. Hamilton fans having been using it to pay homage. Rihanna debuted “Bitch Better Have My Money” on the app. Pitch Perfect 2 stars launched a contest on it to find new talent. To celebrate the end of Saturday Night Live’s 40th season, Dubsmash encouraged users to recreate popular sketches and shorts. Bravo incorporated the app into its recent Real Housewives of New York premiere. Kristen Stewart did one, and Selena Gomez took it full circle with Jimmy Fallon.

While Dubsmash might offer relatability for celebs, it has more practical uses for film and TV promo. The stars of Agent Carter and Agents of S.H.I.E.L.D. may be the most successful at using Dubsmash for promotion, incorporating it into a series of cross-cast charity battles.  On Oct. 17, #TeamCarter was declared winner of the months-long Dubsmash Wars, raising $79,259 for Stomp Out Bullying; Team S.H.I.E.L.D. raised $75,070 for St. Jude’s Children’s Hospital.

In those three months, they managed to engage various celebrities, like Miss Piggy. But more importantly, they engaged fandoms. Hayley Atwell, aka Peggy Carter, has especially proven she has a knack for the dub. Agents of S.H.I.E.L.D. star Clark Gregg explained the genesis of the Wars and how Marvel really got behind making it a “battle”:

“I believe it’s important, especially in our particular genre, to keep it fun at work. It’s gotta be fun, and sometimes it’s very dramatic, but we’re trying to keep it fun, and we keep a sense of fun, and Hayley’s amazing at that. I couldn’t love her more. Literally, one of those things, we started out doing it, we didn’t think anybody would care about it. We were just trying to get through a long weekend of relentless, and really fun work at Comic-Con. I think it’s really … It started to get intense when, because both Hayley and myself, and I think frankly, Chloe and James as well … Turns out we’re really competitive.”

They even dared fans to do a very awkward dance to “The Final Countdown” before the winner was announced.

Unsurprisingly, Atwell and Gregg are set to perform on Lip Sync Battle in 2016.

Patterson posits that what celebs do on Lip Sync Battle isn’t so much tied to the act of selling something, but rather connecting—that it’s more of an “old-school variety” show, “more SNL than it is The Voice.”

“Celebrities are doing this for their fans,” she added. “They’re entertaining and they’re not plugging. …The thing about celebrity culture now is that they’re directly connected to their fans. They’re not speaking through third parties anymore, where there’s a publicist or a manager or an agent. [Every day, they’re] showing parts of themselves and connecting directly and talking directly to their fans. I think this is just an evolution of that.”

Indeed, we see behind the curtain a bit. The app allows us to discover that Tom Hardy is really, really into Dubsmash, has good taste in music, and does dubs with his stunt double, Jacob Tomuri. We learned Hugh Jackman loves Adventure Time, and Sofia Vergara and Reese Witherspoon understand memes. We discovered Maya Rudolph already did the best Dubsmash, so we can all stop trying.

Because Dubsmash is an international app, it’s attracted an international audience. Bollywood stars are using it much like American celebs, and it’s become extremely popular on Facebook and Twitter in India. Same goes for Pakistani and Singaporean celebs. There’s even an Indian approximation of a Dubsmash War.

Two sisters in Germany have become viral stars because thanks to Dubsmash. The women, who go by Grzmotbilska and Breshna, were born in Afghanistan and raised in Germany; they grew up with overlapping cultures and influences, and Indian culture was one of them. The YouTube channel Dubsmash ke Deewane is the platform for their dubs. A June clip of them dubbing a scene from 1994 Bollywood film Andaz Apna Apna now has more than 230,000 views, and the sisters flip the gender roles of the two main characters. A Dubsmash compilation from July has more than 1 million views.

Grzmotbilska explained their dubs were “created out of boredom,” but many of the Indian films they dub, she said in an August interview on her channel, are “childhood memories.”

Indeed, entertainment is the main reason the app is so popular. It’s teens in bedrooms or school bathrooms dubbing Taylor Swift and #bestfriendgoals and grandmas who possibly don’t know they’re on Dubsmash. A generational bridge, really. It’s become a place for remix culture, much like SoundCloud. You can record your own sample of dialogue from a movie, and a stranger might choose to dub your version and share that in turn.

Is it mindless? For all the lip-sync battles and Dubsmash wars, what is it adding to the culture? Writing for Esquire, Dave Holmes attempted to break down the facade of Dubsmash videos:

“Lip Sync Battle and Dubsmash are popular because celebrities do them, and celebrities do them because they view them as opportunities to let their hair down, as though our culture were forcing them to act like prim little Frasiers and Liliths all day long. … When you post and/or share lip sync videos, what you are telling the world is This is how I choose to be entertained. I don’t want to see or hear anything new; I want to recite what I already know, or better still have one of the Pretty Little Liars do it for me.”

For all the lip-sync battles and Dubsmash wars, what is it adding to the culture?

While that’s a bit of an oversimplification, I found listening to the samples on Dubsmash more interesting than performing them. After I found the lines I wanted from American Psycho and Grandma’s Boy, I tried to give my best performance, but I hated all my takes. I was too aware of the faces I was making. The same could not be said for my significant other, who absconded with my phone to lip-sync LMFAO songs while I impatiently waited for him to return from his Dubsmash hole. Was that a Dubsmash war? Even now, I’m not sure.

Dubsmash is yet another handheld distraction, another way to promote ourselves and, maybe, connect through a pop-culture thread. Still, nothing beats being able to lose yourself in a moment and feel the ground give way a bit.