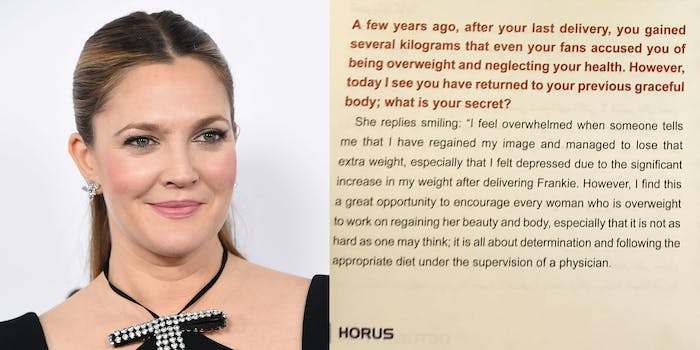 Celebrity profiles can often be self-serving PR. A Drew Barrymore interview published in Egypt Air’s in-flight magazine Horus is… not.

Adam Baron posted the interview on Twitter yesterday, and it quickly went viral for its stilted prose, grammatical errors, and misogynistic angling. The piece lingers on the Santa Clarita Diet star’s “crucial role” as a mother, her weight, and goes wild with the armchair psychology in the opening paragraphs:

It is known that Barrymore has had almost 17 relationships, engagements and marriages; psychologists believe that her behavior is only natural since she lacked the male role model in her life after her parents’ divorce when she was only 9 years old. Ever since that time, she has been subconsciously seeking attention and care from a male figure; but unfortunately things do not always go as planned and she has not yet succeeded in any relationship for various reasons.

This interview with Drew Barrymore in the Egypt Air in flight magazine is, umm, surreal. pic.twitter.com/fN3lNHXbL0

Surreal is the right word because the interview might not have actually happened. A representative for Barrymore claimed she did not “participate” in the interview, but Egypt Air stood by its story, telling one Twitter user that the interviewer (listed as Aida Tekla) was a former president of the Hollywood Foreign Press Association, and it was a “professional magazine interview.” Longtime journalist Aida Takla O’Reilly was named president of the HFPA in 2011. According to a 2012 L.A. Times article, “the Egyptian native writes for a publication little known in the U.S. It is Young Plus, a glossy teen-oriented magazine published in Dubai.”

Dear sir, this a professional magazine interview conducted by Dr. Aida Tekla Former president of the HFPA (Hollywood Foreign Press Association) and one of the voting members of the Golden Globes.

Barrymore’s rep said they are “working with the airline PR team.”