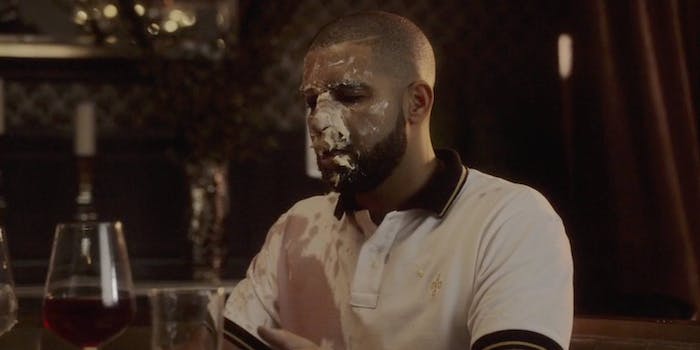 'Why you gotta fight with me at Cheesecake?'

When Drake released Views earlier this year, one lyric in particular stood out in the face of so many meme-able lines. One seriously branded lyric that wasn’t about CVS.

“Why you gotta fight with me at Cheesecake? You know I love to go there,” Drake raps on “Childs Play.” The shoutout to upscale Applebee’s was enough to get the restaurant chain to tweet its support. Tapping into that thirst for Cheesecake, Drake released the short film for “Childs Play” which—you guessed it—takes place in a Cheesecake Factory.

At least, its intro does. Drake is joined by a livid Tyra Banks, drawing her emotions from the iconic “We were all rooting for you” America’s Next Top Model rant. She smears his face with his dessert of choice and throws red wine on his white shirt. The normie rapper uncharacteristically starts the song rather than reaching for his Tide pen.

Meanwhile, the strippers of whichever club Drake gets roped into going to with friends are met by a new manager named the Texas Hammer Jr. Dude offers up a pretty shit contract negotiation for his employees then proceeds to use Alan Jackson lyrics as a call to prayer. This, apparently, is what Canadians think of rednecks.

Drake raps in the parking lot in front of a hoopty, hood up, exposing a neon “thi5 why ya hoe mi55in” sign. No one knows why the extra “e” in ho is there. Drake doesn’t have to answer to us. He just wants some peace and quiet at his favorite dining establishment, followed by a solid sex session—once “Childs Play,” now a herculean task. Thank god the Cheesecake Factory airlifted him some swag.