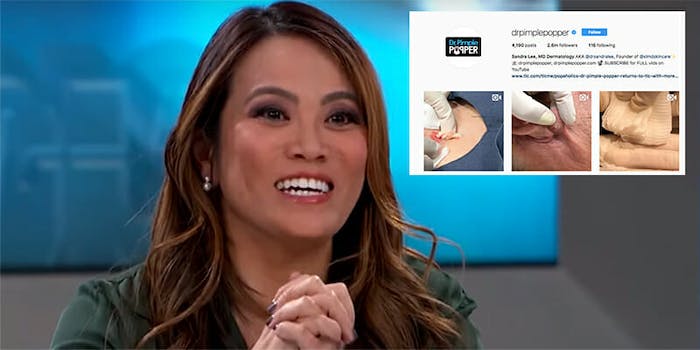 Dr. Pimple Popper is getting her own reality show on TLC

There’s something addicting about those pimple popping videos—and now you’ll be able to watch them on TV.

Millions of people have watched Lee pop blackheads, cysts, and all kinds of other skin things, and she’ll continue to “poke, prod, and squeeze” on a one-hour program once a week, TLC said in a press release. Oh—and the channel is casting for the show, so feel free to volunteer to have puss squeezed out of your skin on television.

The good doctor told the Daily Dot back in 2016 she started posting her pimple popping videos to teach people about their own skin. The rest was viral history.

“It’s almost like riding a roller coaster or watching a scary movie,” Lee said at the time. “It gets people excited. I think sometimes the first response of a lot of people is they are sort of repulsed by it, but it has this hypnotic quality. You can’t believe it and have to watch another one.”