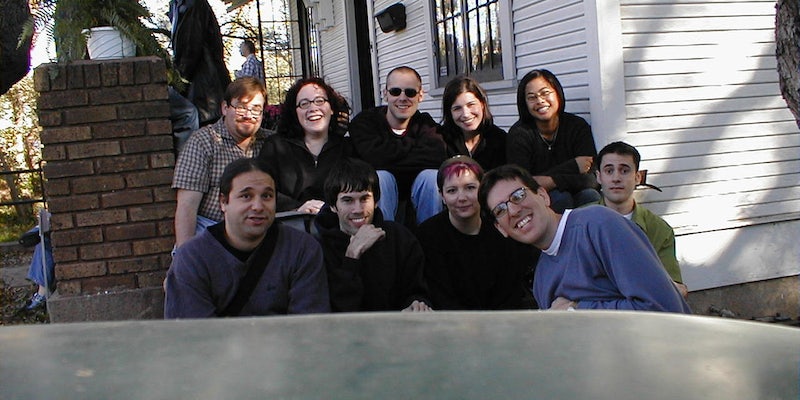 The Daily Dot’s founding editor finds himself in an Austin time warp.

It’s March. I’m in Austin. How does this keep happening?

I’ve been going to South by Southwest Interactive for practically as long as the conference has existed. And as long as I can remember, the show has had a fundamental identity crisis. What are we doing? Why are we here?

Heck, Hugh Forrest and the gang couldn’t even figure out what to call the thing. South by Southwest Multimedia? (See our SXSW timeline on pages 4 and 5 of our print edition and on dailydot.com to get a sense of its evolution.)

When I first started going, SXSWi was a very tentative offshoot of the successful music and film conferences of the same name. It’s clear what you did at those events: listen to bands, watch movies, and then discuss the experience. So what were we webheads supposed to do? Show slides of webpages and talk about them? Pretty much.

We made do, sliding from party to party. We had homepages, man. If you had your own domain name, you were Web royalty. We didn’t have Dropbox, but we all knew how to use FTP. In 1998 and 1999, no one talked about blogging, because it had barely been invented.

I did hang out with Peter Merholz, though: He’s the clever fellow who shortened “weblog” to “blog.” And I remember meeting a gawky, quiet type by the name of Ev Williams, who went on to create Blogger.com. And sold that to Google. Then he shortened “blog” to “Twitter.” He’s still gawky and quiet—just much, much richer.

Fast forward a decade, and there was Evan Williams—as the Wall Street Journal and others referred to him—bombing on stage in his keynote. He failed to deliver what the crowd wanted: some amazing new product, an app to download, an API to iterate against.

The entrepreneurs and promoters have taken over SXSW, turning it into yet another launch showcase for something they’re hoping to sell—themselves, mostly.

In the process, they’ve pushed the storytellers, designers, community builders, and other assorted dreamers to the shadowy corners of the Austin Convention Center—the same spots where we once happily plunked down on the floor, chatting away. There were no wireless laptops in front of us, because we had no Wi-Fi yet, and no smartphones to distract us, because we didn’t have cell phones yet, smart or dumb.

One note that gives me hope: One of those old friends I ran around Austin with, Jeffrey Zeldman, will be the first person ever inducted into the SXSW Interactive’s Hall of Fame. That the conference has been around to have such a thing suggests that we’re starting to have some perspective. Any mobile app developer who works with HTML5—the lingua franca of the warring smartphone nations—has Zeldman’s long crusade for Web standards to thank.

That vision of a Web open to all is about far more than snippets of code. It’s about a vision of the society we want to form. Back in the ’90s, we had the barest glimmering of it. But it gripped us all the same.

Maybe that’s why we gather in Austin every year: to tell each other stories of the people we hope to become.