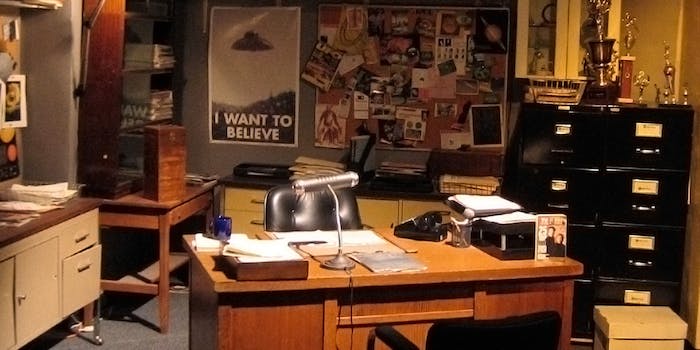 The truth is out there: ‘The X-Files’ hasn’t aged well

A shortened 'X-Files' season could be the best thing that ever happened to it.

For as long as I’ve loved television (and I’ve loved it since before I could tie my shoes), I’ve been in love with genre shows. In the ’90s, before real people owned Macs and nerds inherited the earth, cult series were still cult. Today, by contrast, networks’ biggest properties are sci-fi, comic book, and horror shows, and so it’s no surprise that, much to Tumblr‘s delight, Fox is reviving The X-Files, a series that proved genre TV could be popular and kickstarted a cult boom that continues today. There’s just one thing I’m afraid to confess: Try as I might, I can’t get into it.

My favorite shows as a preteen—Farscape, Buffy, Star Trek—aired at quarter to 7 on weeknights, after The Simpsons and Top of the Pops. X-Files, being unsuitable for 12-year-olds (thus more appealing still), went out late on Fridays, meaning I only ever caught a handful of episodes—enough to make me want to watch the rest, if not to grasp the dense mythology. I saw the episodes with Eugene Tooms, the bounty hunters, and the circus freaks, deciding I’d fill in the gaps one day and learn about Mulder’s sister, as well as whether Scully’s hair was actually magic. And so a year ago, at 22, I finally set out to binge-watch the whole thing.

I didn’t make it past the first season.

Time has been friend and enemy alike to X-Files.

Much as I loved what I saw way back when, watching through laced fingers as Mulder and Scully flashlit their way through creepy submarines and suburban closets, X-Files has aged horribly since its run started. Sure, there are exceptional one-off stories, but on trying to marathon the show, I realized, much to my dismay, that not only were the monsters of the week often not all that good, but they also caused the whole series to plod. Only the fact that I’m a completist made me finish season 1 rather than give up halfway through. While the effects are creepy, the look bleak, and the Anderson–Duchovny dynamic a high point, a plurality of its episodes are, to be blunt, boring. At least three or four times, I fell asleep.

Time has been friend and enemy alike to X-Files. Like Steven Moffat’s Doctor Who stories, we’ve tended to recall the best moments better than the whole; rewatch an entire season 22 years on, and the series turns out not to have weathered at all well. Viewers today stream hours of their chosen series at a time, no longer made to wait another week if one episode disappoints. If anything, X-Files should benefit from the Netflix age, weaker points overlooked more easily, but instead, binge watching only throws into sharp relief how much padding there is.

Chris Carter’s show is noted for its intricate mythos—extraterrestrial activity, official corruption, personal loss—because in the ’90s, it spearheaded the use of ambitious season- or series-long mysteries. In that respect, it’s now a victim of its own success: Next to the lineage of cult shows it made possible, X-Files feels anthological, one part arc-plot to 10 parts monster-of-the-week, storytelling bogged down by an excess of standalone stories. Over the last decade—particularly, I’d argue, since Lost—viewers have become used to serialized plots, such that on most high-profile series now, episodes tie into season arcs more often than not. On reflection, X-Files now seems more like Tales From the Crypt or Twilight Zone, without the consistency on which shows like those relied. Perhaps Fox’s shortened upcoming season is intended to spare the lead actors’ schedules… or perhaps network executives have realized a miniseries style will help pacing.

Plenty of series, to be fair, are slow and of-the-week-y in their first seasons, but I’ve heard quite consistently that X-Files doesn’t improve. Equally, others from the same era have aged better. Even in early seasons of Buffy, villains and long-term schemes are never far away; the show’s storytelling holds up well next to Joss Whedon’s current series, Agents of S.H.I.E.L.D. Whereas Star Trek: TNG did better week-by-week narratives than X-Files did, Voyager did better at balancing them with an ongoing storyline.

I might be speaking much too soon: There’s every chance that before the revived series hits screens, I’ll go back to X-Files and fall in love with it. If I do, though, it’ll be an effort, and meanwhile there are ’90s series I’m drawing more pleasure from discovering. (Having managed to miss Babylon 5 the first time round, it’s currently my distraction of choice.) For Mulder and Scully’s new outings to attract fresh fans, the show will need to change—a daunting prospect given decades of loose ends. If it fails to adapt, perhaps X-Files will be best remembered nostalgically, a slice of ’90s iconography whose memory beats reality.

Photo via Alistair McMillan/Flickr (CC BY 2.0)