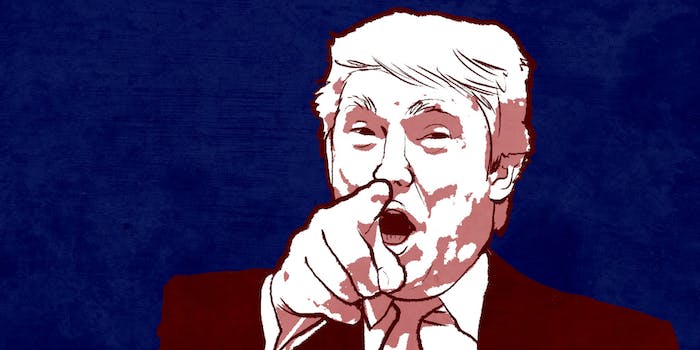 'How did he make it this far?'

Back in March, Los Angeles gangsta rappers YG and Nipsey Hussle released a fun, loose diss aimed at Republican presidential hopeful Donald Trump. The DJ Swish-produced song, “FDT,” ran on its blaring indignation but sputtered out before it hit the mainstream, lacking the star power to reach beyond listeners of regional, urban radio.

“How did he make it this far? How the fuck did it being?” raps G-Eazy, who later pivots to Trump’s daughter. “Ivanka can get it.”

Macklemore raps about celebrating in the streets “when Hillary wins,” and lands a meaty jab at Trump by painting him as a spoiled brat: “How about we stop selling automatic guns? You got rich because your daddy gave you automatic funds.”

And while the Seattle Grammy-winner pledges to help the Democrats retain the White House, he also promises to remain an activist in the U.S.—and not flee to Canada—should Trump win in November. “We ain’t gonna let you fuck up four years,” he raps.

That’s bold because YG says he ran into trouble with the Secret Service while working on the original and clashed with authorities while filming its subsequent music video:

Hussle is absent from the remix, but YG shows up at the end with new lyrics about hunting down Trump on the golf course and beating him at his own leisurely game—or worse. Then again, in the eyes of this trio, nothing can be as bad as a Donald Trump presidency.