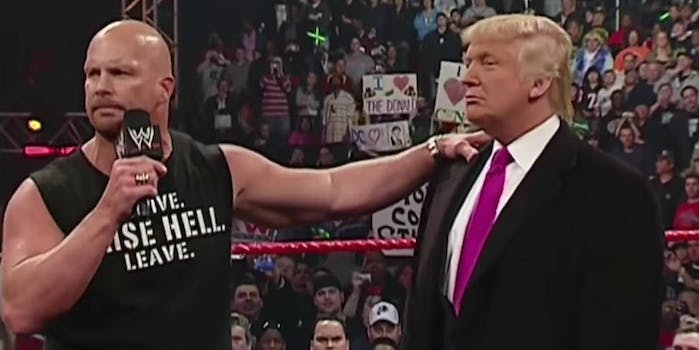 How did Vince McMahon convince Donald Trump to take the Stone Cold Stunner?

Trump is the only president ever to be on the receiving end of a Stunner.

Donald Trump made history on Friday by becoming the 45th U.S. president and the first president who was once the victim of the Stone Cold Stunner.

The incident occurred in 2007 when the WWE was touting a feud between CEO Vince McMahon and Trump, and to top off the rivalry, the two decided to compete in a Hair Vs. Hair match in which the loser would have his head shaved.

But since there was no chance Trump could compete in a match, the two picked actual wrestlers to take their places, and at WrestleMania that year, Trump’s representative won, meaning Trump got to give a makeover to McMahon.

Austin, who played the role of the anti-authoritarian hell-raiser, then gave Trump his finishing move, the Stone Cold Stunner, just for the hell of it.

Funny hat-wearing announcer Jim Ross mentions Trump’s ex-wives while Trump is rolling around on the mat with shaving cream on his face.

But how did McMahon convince Trump to take Austin’s most famous move? Here’s how Austin recently explained it to Complex:

“Vince says to me, ‘Steve, I’m going to see if I can get Donald to take the Stunner,’” Austin said. “… He goes up to Donald and says, ‘Hey Donald, this is Stone Cold Steve Austin.’ I shook Donald’s hand. He goes, ‘Listen, I want to know if after the match, when everything is done, if Steve could hit the Stone Cold Stunner on you.’ Donald says, ‘You think it’d be a good thing?’ and Vince goes, ‘Oh, of course it would be. It would just blow the roof off the place.’ And Donald’s right-hand guy was saying, ‘No, no, no! You don’t need to do this, we got other things to do!’ He’s trying to talk him out of it. And Donald says to Vince, ‘You think it’ll help?’ and Vince goes, ‘I promise you it’ll help.’ And Donald says, ‘OK, I’ll do it.’

Of course, Trump’s ability to sell the move was horrendous, and the actual wrestling looked like it wasn’t even good enough to play for 20 customers at a third-rate high school gym. But Austin found respect for Trump on that day, anyway.

“It wasn’t a picture-perfect Stunner, but I give Donald Trump a hell of a lot of credit for being a man,” Austin said. “He was a stand-up guy, he was there to do business and we did business, so I respect the man for that. If I see him giving a speech on the TV, I don’t think, ‘Hey, I gave this guy a stunner.’ We were doing business and we did business. The fact that he is going to be the next president of the United States, it’s a hell of a story.”