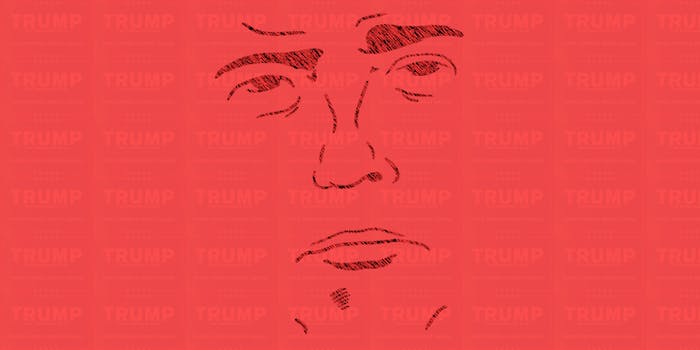 A Spotify tribute to Donald Trump

You might be our president, so here's our allegiance.

We have to start accepting that, emotions aside, smart gamblers should be putting their chips on your name right about now. Your presidency feels imminent—a critical brand extension that America happens to desperately crave.

To help illustrate your cultural prevalence, we’ve made a playlist for you on Spotify. Just about all of these songs are called “Donald Trump,” and were written mostly as metaphors for top-shelf lifestyles. Some are political. Most are recent. One is 25 years old.

And now our humble tribute:

This is about how women wish their boyfriends were more like Trump. Great for relaxing lovemaking. Confirms that songs have referred to Trump as a symbol of wealth for more than 25 years.

It might sound like “while I’m on my Donald Trump shit” is a metaphor for great great cocaine, but here Miller actually thinks he’s you. He appears elated.

The first 45 seconds are worthy of your profile, set to happy piano music. After that… well, skip after 45 seconds. It’s just a really long piano solo—you don’t need to hear that.

A hilarious satire about how killing animals is wrong, and how your kids shouldn’t do it. White people with pianos all love you, Mr. Trump.

We like to think of you as a John McClane-type character, Mr. Trump. You’re a straight-shooting maverick who knows that collateral damage isn’t only necessary—it’s also what the people want to see. We play this whenever daydreaming of your inauguration.

There’s a reason you’ve become a common refrain in hip-hop music: You’re a hero. You’re a role model. This song doesn’t even mention you’re name—it nails the embodiment of your essence to such an extent that it’s content to just make your name its title. “I does me/ Fuck the guidelines.” It’s all the reasons your term(s) will go down in history.

What is the term for a gait that exudes confidence, and is the heartbeat of any bottle-popping party? That’s called a “Donald Trump Walk.” This song may have given it a name, but it’s been a walk for at least 30 years.

It’s about being rich and awesome. Of course it has your name all over it, you skyscraper-building stud.

Just another song that equates your name with having the net worth of somebody who should run the United States.

Same as the last few, really. “Ass fatter than Donald Trump’s wallet,” may not be the best parallel to draw, though—a collection of platinum cards won’t make a wallet too fat.

If you look at the song title, it’s not like the others. It seems as if you’ve been viewed as a tad bit “racist” by its creators following choice comments on illegal immigrants.

Back to another good, catchy tune that works: It uses your name as an adjective for “best” and “super rich.” Sir, of the 16 tracks on this list, this is one of the 14 that you won’t need to hit “skip” on after an initial, strictly informational listen. This a song of celebration.

Ah, see: When you toss one race under the bus, it makes people ask questions like “wait, is Trump a racist?” The election is still a year away—stick to talking about how rich and awesome you are. Throw money into crowds. Speak only of dollar signs and expensive things. Wear a suit made of solid gold. Your poll numbers aren’t solid because of your thoughts on immigration—they’re solid because you were on a reality show and have a tower named after you, like a real-life Tony Stark. The spectacle, Trump. The spectacle. The journalists and voters will beg to kiss your ring.