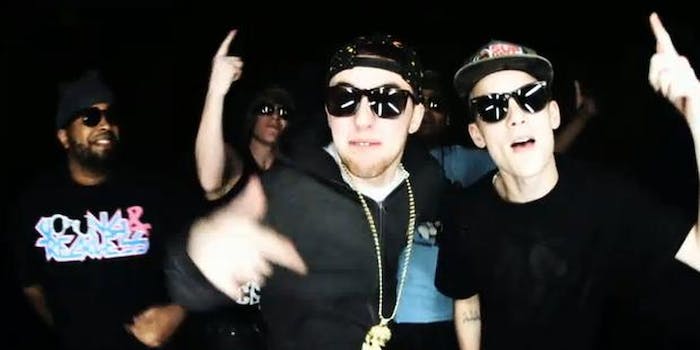 Mac Miller’s song, “Donald Trump”, hit more than 20 million views on YouTube, and Trump, catching wind of the numbers, made a vlog yesterday addressing the song and the Pittsburgh-raised teen rapper.

Donald Trump even tweeted his video at Mac Miller, airing his complaints about the language. Mac Miller responded, “hahahahaha that is awesome. i did not expect that. you can always get the clean version.“

Will they be friends now?

In Trump’s 40-second vlog, filmed in what is presumably his office in a high-rise, he says that in Miller’s song, “the language is very hard to understand,” but calls  Mac Miller the “next Eminem.” He adds the lyrics are “probably … not the cleanest language we’ve ever heard.”

Despite being named “Donald Trump,” Mac Miller’s song isn’t about the financial baron per se. Instead, “Donald Trump” is used as an adjective to define wealth and power.

Case in point, the refrain in “Donald Trump:” “Take over the world when I’m on my Donald Trump shit.” Mac Miller’s rap addresses haters and talks about making it.

Trump’s vlog on Mac Miller borders on boring, a surprise from the usually energetic public figure. A couple of us here at the Daily Dot wondered if Trump’s failed presidential run left him more humble — until we viewed the next video uploaded to Trump’s channel on the same day as his vlog.

Even if Trump hasn’t taken over the world yet, he is at least sometimes on top of it in a flying machine — accented with gold.