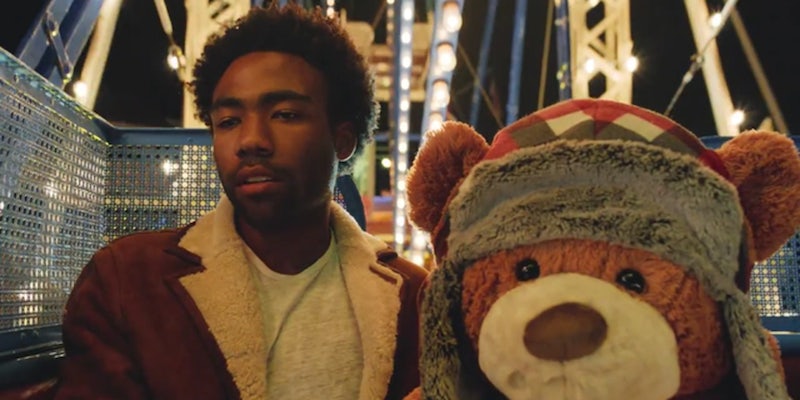 Donald Glover blurs the lines between real and imagined self

You half expect a “hashtags rule everything around me” joke.

Is Donald Glover, a.k.a. Childish Gambino, the most visibly meta musician we have right now?

Glover became popular on the Internet—for both his music and starring role on Community—named his new album Because the Internet, touched on our new collective online language, and used that very Internet to work out some of his issues with the very celebrity the Internet brought him, as well as do some clever promotion for his new album.

Because the Internet was released today, and it unpacks what it means be a virtual celebrity, to live on the Internet and open ourselves up on Tumblr, Twitter, and Instagram.

On Because, references are as legion as Anonymous. The closing track is titled “Life: The Biggest Troll (Andrew Auernheimer)” and references imprisoned hacker “Weev.” Another track, “Zealots of Stockholm (Free Information),” feels a bit arch next to a track like “Sweatpants” or “Worldstar.” You half expect a “hashtags rule everything around me” joke.

And it might be all those references that actually weigh the album down. Like his vulnerable Instagram hotel notes from a couple months ago, the album comes off like a series of ideas written in the moment, with no strong thread to keep them cohesive or linear. The concept is certainly there, but the music is more imitation and there’s not much of a critique of the actual Internet that informs nearly all of the album’s tracks. OK, so, because the Internet…what?

But perhaps that explanation’s still to come. A screenplay based on the album has recently come to light, so his Instagram notes and Tumblr posts might have been part of some bigger concept, adding an extra layer of meta to the story. It’s hard to say whether we’re getting Glover or Gambino as more of this story unfurls, but on the Internet, it’s quite easy to lose track of real and imagined self.