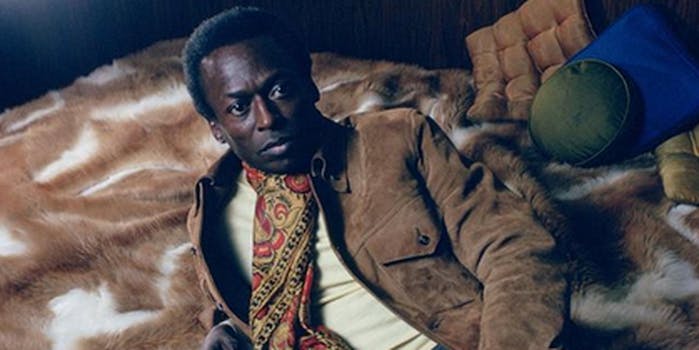 Don Cheadle shows other celebrities the right way to crowdfund

“I’m personally putting a big chunk of money into our budget."

Don Cheadle wants to make a movie about the Young Man with a Horn. The way he’s going about it, you could say that it’s The Birth of the Cool.

The actor went public with his intentions of making a movie about jazz legend Miles Davis earlier this week, launching an Indiegogo campaign designed to raise $325,000. The money, Cheadle says, is only a portion of the total cost it will take to craft the biopic, something he says he’s wanted to make since he was in elementary school. Cheadle plans to foot the rest of the bill himself.

Deadline reports that the film, titled Miles Ahead, which Cheadle will star in, produce, and make his directing debut, will detail “a few dangerous days in the life of Davis, as he emerged from a silent period to conspire with a Rolling Stone writer to steal back his music.” Funding for the Indiegogo campaign runs out July 10. Cheadle plans to start shooting shortly thereafter.

Rewards for donations include clothing, box-set recordings, personalized tours of the film’s Cincinnati-based set, as well as unreleased artwork created by Davis himself. He’s raised an excess of $58,500 so far, with 36 days to go.

Conventional thinking would suggest that Cheadle would face a bit of opposition for trying to raise money for a movie through Indiegogo when he’s packing a Hollywood-sized checking account that could probably fund a few more movies in addition. But Cheadle’s method is slightly different. Whereas Zach Braff targeted $2 million for Wish I Was Here last spring and Spike Lee sought $1.25 million in July, Cheadle’s only hoping to raise a fraction of the cost–and it’s about a totally cool subject. The world could use more movies about Miles Davis. (Currently, there are zero.)

“Most studios don’t make these kinds of music anymore, so we are doing it independently,” Cheadle said in a statement. “I’m personally putting a big chunk of money into our budget as well as putting all my fees back in. But the extra money we hope to raise on Indiegogo will help us re-create the multiple time periods we’re dealing with and with the logistics of incorporating all the music. We are excited to get people tailing about the movie early, raise awareness, and set into motion the groundswell of support we hope will continue through to the film’s final release.”