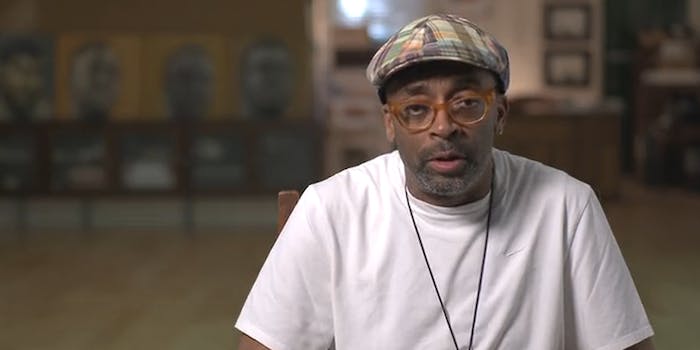 Spike Lee wants the Internet to do the right thing and help get his next movie off the ground.

Spike Lee wants the Internet to do the right thing and help get his next movie off the ground.

Now his remake of South Korean revenge classic Oldboy is in the can, Lee wants to take on a smaller project with the help of throngs of Kickstarter users.

He’s fairly scant with the details on what the new project will entail, noting little more than the conceit of humans having a new addiction: blood. For the most part, Lee pushes forward the notion that the Hollywood system is geared towards big-budget superhero films, without much of a rosy immediate future for independent films. He appeals to those who’ve enjoyed his films (or “joints,” as he often calls them) to help him make a “funny, sexy, bloody” new movie.

The rewards range from a thank-you tweet to dinner and a chance to take in an NBA game featuring Lee’s beloved New York Knicks with the man himself.

However, the filmmaker hasn’t quite caught the imaginations of Kickstarter users in the same way the Veronica Mars and Zach Braff projects took off like a rocket. Lee mentions both of those projects in his campaign video, leading him to think Kickstarter could be a viable option for his next flick too. Yet his project (at the time of writing) has received pledges of $90,000 of his proposed $1.25m goal.

Compare that to those other high-profile projects: Veronica Mars met its $2 million goal within a day on its way to a $5.7m total. Braff hit his $2m goal within four days, and after some confusion over how part of the project would be funded from outside sources, topped out at $3.1m.

From our perspective, Lee might have been best served until waiting until around the time of Oldboy‘s release in October. The added publicity around then might have helped jump start his campaign, but on the other hand it makes sense that he’d want to dive into his next movie as soon as possible.

Lee’s a compelling filmmaker and there’s little doubt he has a lot of fans. There’s every chance he could make it to his goal before the clock runs out next month.