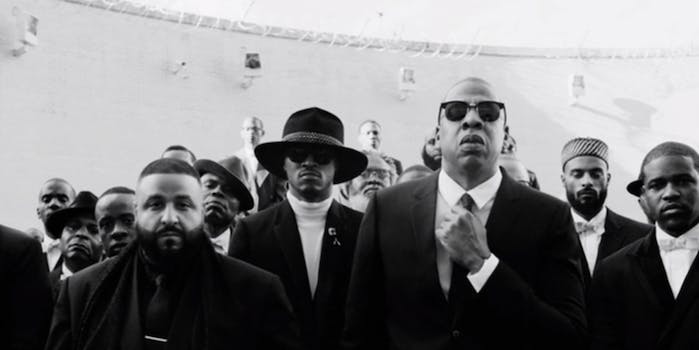 But you'll need Tidal to watch.

Immediately following Sunday night’s BET Awards, Snapchat legend DJ Khaled debuted his new video for “I Got the Keys” via Tidal. It features a hungry Jay Z performance, and a dialed-in chorus from perennial craftsman Future.

The music video finds Jay dressed like Malcolm X—’60s-inspired glasses, white dress shirt, black tie—while blending industrial prison complex raps with his own running narrative about being a retired kingpin, hiding from his past. A clique of rap heavyweights pay their respects and pose as hype men: Rick Ross, Pusha T, 2 Chainz, Fabolous, Swizz Beatz, and Busta Rhymes all suit up and look stern for the camera.

“How we still slaves in 2016?” Jay asks, before pivoting to fun lyrics about safety belts and Carolina Panthers cornerback Josh Norman. “My wife Beyoncé—I brag different.”

The chorus is a wink to DJ Khaled’s perennial deployment of the key emoji on Snapchat, but it stands as a solid late-era Jay single. A running strength of his remains the ability to adapt to just about any hip-hop track and it suits him on this high-energy bounce beat more tailored for Future’s Auto-Tune antics. Jay still has that post-“Jigga What” double-time rapping ability in his pocket-squared breast pocket.

He’s chasing wifey, of course, who scorched earth Sunday night alongside rapper-of-the-moment Kendrick Lamar with a “Freedom” performance. During that same telecast, R&B and dance idol Usher donned a jacket that read “Don’t Trump America.” It’s becoming a sweltering summer of institutional backlash and political angst from hip-hop—even the corner-office elites are getting in on the fun.