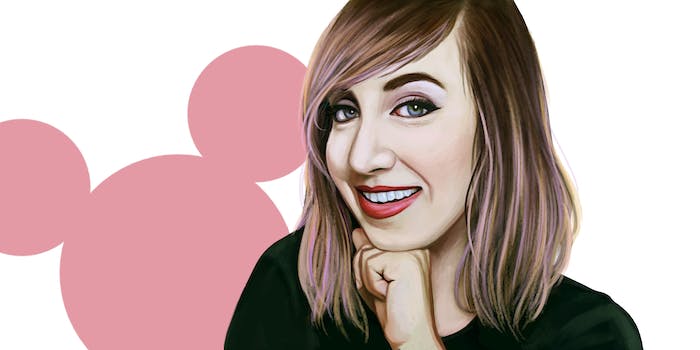 With Snitch, no part of Disney is off limits.

When I moved to New York City from Los Angeles, there were a million things I had to get used to. Crying in public (it’s a rite of passage), the rotting smell of garbage, the absurdly small steps going to and from the subway. But the thing that eventually hit me the hardest was the 2,000 miles I had just put between myself and Disneyland.

When I catch the scent of recycled water from a random puddle outside, I can’t help but be transported back to the launching dock of Pirates of the Caribbean, or the drop of the Matterhorn. But when the Disneyland homesickness hits the hardest, and all I want is to suspend disbelief and pretend the Toontown firehouse is my home, I switch on Sarah Snitch and let her Disney vlogs work their magic.

A former Disneyland cast member, L.A. native Sarah Snitch brought her overwhelming love of all things Disney to YouTube in 2010.

“There wasn’t really anyone talking about Disney on YouTube when I started. The coolest thing about the Disney community on YouTube is that it has exploded in the past five, seven years,” Snitch tells the Daily Dot. “What I think is especially unique is that all of the Disney channels I follow do very different things. Some people do Disney history, some people cover the Florida theme parks, some do the international theme parks, some do skits and music videos, and some do Disney-inspired cooking. No one is really copying each other or creating uninspired videos. I think it’s probably because, as a Disney fan, you grow up with these films that encourage imagination and entrepreneurialism, which has just created a community of people who want to stake their claim and do their own special thing.”

In her most popular videos, Snitch gives expert tours of very specific Disneyland experiences. Finding the secret snacks, going on VIP tours, eating inside Club 33, her channel is enjoyable and useful to Disneyland attendees ranging from first timers to season pass holders.

In 2015 Snitch created a second channel, Thingamavlogs, with fellow Disney superfans and vloggers Patrick Dougall, Tiffany Mink, and Snitch’s boyfriend, Leo Camacho. Holding 7.9 million views on their channel, the Thingamavlogs crew make weekly videos diving into every aspect of Disney from fashion to trends to park secrets. As a collective, their greatest trait is they make you crazy excited to visit Disneyland. And as someone who has been to Mickey’s home hundreds of times, what I’m continuously impressed about is how much I continue to learn from both Snitch’s and Thingamavlogs’ videos.

“It’s a rule at Disney theme parks that you aren’t allowed to dress in costume if you’re over 10 years old (for fear that you might be mistaken for a real princess by younger guests). To get around that rule, and still be able to dress somewhat like a Disney character, a blogger named Leslie Kay created DisneyBounding, where you dress subtly like characters using colors and accessories,” Snitch recently told Gloss.

DisneyBounding quickly became a sensation among the Disney blogging community in 2014, after blogger Leslie Kay popularized the trend through outfit posts inspired by every Disney character. But as Snitch tells the Dot, it can be a challenge turning your hobby or passion into a full-time career.

“Not gonna lie, it gets difficult. But there is so much within Disney to remain passionate about because Disney has expanded so much and will continue to expand. From parks, to movies, to video games, to television—there is never a shortage of things to experience and talk about and in that way it is easy to stay passionate,” says Snitch. “If I ever begin to feel like I’m losing the ‘magic’ of it all, I do really try to remember little Sarah, who would spend hours on end scrolling through Disney history websites and reading endless Disney trivia books.”

Whether you’re a Disney fan or not, channels like Snitch’s provide an insider look at a niche community. Snitch’s videos show the power the internet has in connecting fans around the world to indulge in creative, out-of-the-box projects that honor their favorite fandoms. Her content is fun and playful, but it drives home the message that what makes you influential on YouTube isn’t viral videos, it’s making content you’re authentically passionate about. So whether that’s tours of the new Disneyland Rose cafe or learning to cosplay as Kermit the Frog, there is a space for every superfan to blossom on YouTube. All they need is a little Sarah Snitch magic to inspire them.