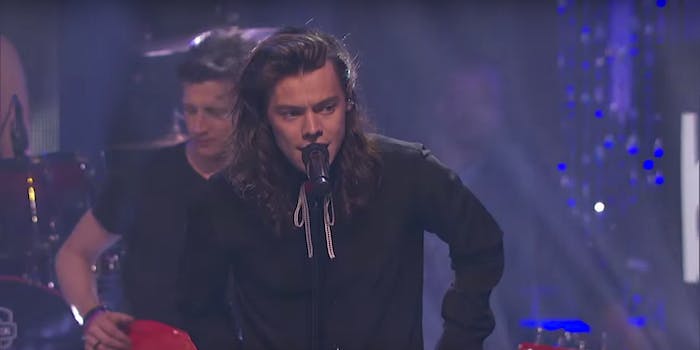 The Brussels-based artist is in hot water with One Direction fans after calling out heartthrob Harry Styles for Instagramming his photograph without giving him proper credit.

The saga starts almost a week ago, when Styles posted a captionless photo of a traditional Burmese boxer to almost 16 million followers without realizing that Scagnetti had taken it. Within its first 15 hours, the photo reportedly got over 750,000 likes, and when Scagnetti caught wind of what had happened, he posted a Facebook status out of frustration.

Styles deleted the Instagram, but Directioners (One Direction fans) were a little less understanding. They flooded Scagnetti’s Facebook comments in Styles’ defense and left negative reviews of his business to boot.

After keeping quiet for a few days, Scagnetti replied to the teens Thursday, hoping to make peace and open some minds:

Guys, as far I understand most of you are teenagers, this is the only reason I take the time to write you, despite all your extremely aggressive, xenophobic, homophobic and racist insults.

So, you should be happy and spread your happiness and love just because the fact that you have, outside the necessary calories to live, a telephone and Internet connection, when hundreds of thousands of boys and girls are starving at this right moment.

But not, you are spreading hate, unlimited hate, in the honour of#harrystyles.

He clarified his stance on the importance of honoring copyright, and he encouraged the teens to be less narrow-minded.

Every streamed song, every CD you buy, every concert ticket you pay, you are paying artist’s copyrights.

If you are not paying for it, some sponsor or company is doing it for you. Nothing is free. Neither Harry Styles work’s, neither my work.

Most of you (the ones insulting me) are damned because this: you are not able to understand people who think different than you.

I’m not talking about the lack of knowledge or simple ignorance in subjects as photography, arts, copyright, etc. You are completely lost on those subjects and that’s fine for me, you are kids.
I’m talking about your petty and narrow mind.

You are so narrow-minded that you think that my centre of interest, at my forties, must be a pop band and a -certainly-, nice guy called Harry Styles.Well… I’m currently following with attention the problem of millions of Syrian refugees living in horrible conditions, dying in the Mediterranean Sea running away from war and terrorism. […]

But you blame me because I did not know who is #harrystyles. Great.

Since Scagnetti’s post, people have started leaving 5-star reviews in support of his taking a stand, and his business’ rating is back up to a 4.9/5 stars.

H/T Petapixel | Screengrab via One Direction/YouTube