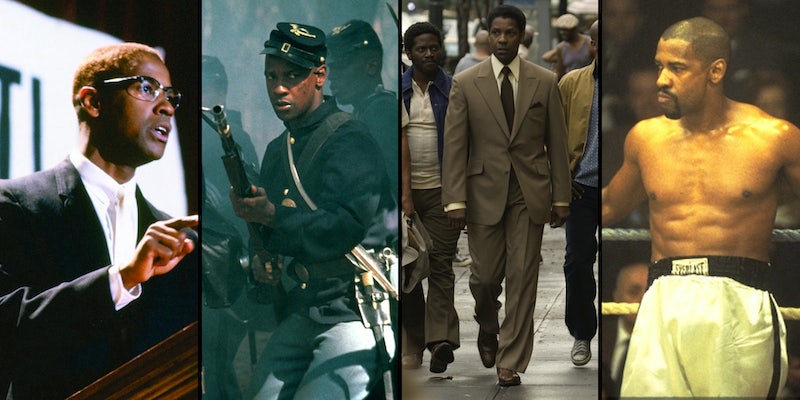 The greatness of the Black icon captured on camera.

Few actors captivate audiences quite like Denzel Washington, and the actor’s historic Oscar nomination for his latest film, The Tragedy of Macbeth, is a testament to his talents. This is his tenth Oscar nomination, extending his record as the most Oscar-nominated Black actor of all time.

His acclaimed performances as corrupt detective Alonzo Harris in Training Day, iconic civil rights activist Malcolm X in Malcolm X, and Troy Maxton in Fences keep our eyes glued to him. He’s the essence of Black excellence and another reminder to the Academy of Motion Picture Arts and Sciences of what diversity brings to the silver screen. And the Academy could use a reminder or two.

It wasn’t too long ago when the Academy faced controversy for its lack of diversity in the nominations for the Oscars. It all started with a single tweet.

#OscarsSoWhite they asked to touch my hair. 😒

Seven years ago, after noticing that all of the 20 acting nominees for the 87th Academy Awards were all white, April Reign tweeted the hashtag #OscarsSoWhite. The viral hashtag led the Academy to announce unprecedented changes to its membership and voting rules to incorporate more diversity.

Though the Academy still struggles with underrepresentation—for people of color as well as the LGBTQIA+ community, Washington’s record-breaking nomination is an achievement we can all celebrate as we move closer to a world where the Academy Awards and other awarding bodies recognize everyone.

As a tribute to the most nominated Black actor ever in the history of the Oscars, we ranked our favorite Denzel Washington movies you could be streaming right now on Sling TV.

Washington plays opposite Matthew Broderick in this inspiring historical war drama. The film tells the story of the first all-black regiment in the US Civil War, led by Robert Gould Shaw, as they battle prejudices from the Confederate army and inside the Union army. Washington’s brilliant performance as Private Silas Trip earned him his first Academy Award for Best Supporting Actor—just one year after his first nomination.

His portrayal of Malcolm X in Spike Lee’s riveting biography about the controversial Black activist is arguably one of Washington’s most captivating performances to date. The film covers the life of Malcolm X, whose unwavering advocacy for Black liberation and empowerment made him a pivotal figure in the Civil Rights Movement. Washington was nominated for Best Actor in the 1993 Academy Awards but lost to Al Pacino in Scent of a Woman—still widely considered one of the biggest Oscar snubs of all time.

This biopic garnered Washington his second nomination for Best Actor, this time for his portrayal of Rubin “Hurricane” Carter. The film depicts the story of a boxer at the height of his career until it all comes crashing down. Carter is wrongfully convicted of murder and sentenced to life in prison. With the help of those who believed him, Carter fights to prove his innocence and secure his freedom.

Washington stars in this compelling thriller as Willian “Whip” Whitaker, Sr., a troubled, veteran pilot who makes a miraculous landing after his plane experiences a mechanical malfunction mid-air. Though hailed as a hero at the time of the accident, an investigation later reveals he was drunk the entire time.

Fired by his law firm for having AIDS, Andrew Beckett (Tom Hanks) teams up with the only willing advocate for a wrongful dismissal suit—Joe Miller, played by Washington, a homophobic, small-time lawyer. A milestone film filled with outstanding and emotional performances by these two Hollywood heavyweights, it was one of the first mainstream Hollywood movies to tackle the AIDS epidemic and the homophobia that surrounded it.

In this Spike Lee film, Washington plays Jake Shuttleworth, a convicted murderer tasked with persuading his estranged son, a basketball prodigy teen (Ray Allen), to enroll at the governor’s alma mater so he can get released early from prison. A compelling drama about a father and son, the film examines the influence basketball has on the relationship between father and son.

Washington stars opposite John Goodman in this classic suspense-thriller. John Hobbes, played by Washington, is a Philadelphia police detective who hunts down a serial killer inspired by the occult. After the serial killer has been caught, tried, and executed, the murders continue, and soon Hobbes finds himself the prime suspect in the investigation.

This biographical crime film tells the story of the real-life gangster Frank Lucas (Washington), who rose to power by smuggling heroin into the U.S., and the detective (Russell Crowe) hell-bent on bringing down his drug empire.

Okay, so this isn’t technically a ‘Denzel Washington’ film, but this interview with Washington and Pulitzer Prize-winner Dana Canedy is a must-watch. The award-winning duo talked about their most recent movie, A Journal for Jordan. Directed by Washington, the story is based on Canedy’s memoir about her fiance keeping a journal for their infant son before he is killed in Iraq.

Start your Denzel Washington movie binge on Sling TV. Sign up today and get a free Chromecast with Google TV!