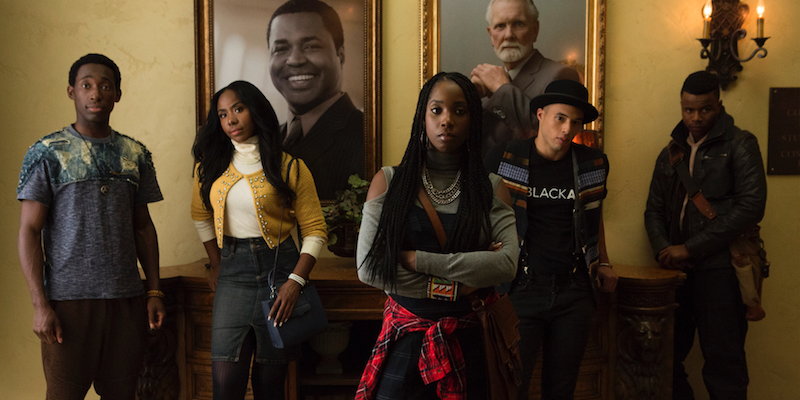 Last month during a SXSW screening, Dear White People director Justin Simien discussed the serialization of his 2014 film for Netflix, and how he wanted it to be a “multi-protagonist” production that focused on a different person each episode—a way to sketch out “identity versus self.”

That’s the central thread of Dear White People. In the 10-episode series, we see everyday class, gender, and race relations at fictional Ivy League school Winchester University, where a blackface party has set off a chain of events and a radio show called Dear White People is the call-out arena.

Many of the same archetypes return: In episode 2, shy journalist Lionel (DeRon Horton) explores his sexuality; in episode 3, Troy (Brandon Bell in a returning role) struggles with his stern father and having to endure white guys calling him “Obama” as he tries to be a bridge between black and white. There’s Coco (Antoinette Roberts), who’s from the South Side of Chicago but has aligned herself the white women of Winchester in a quest for power. An episode explores the beginning of her friendship with Sam (Logan Browning), who’s biracial. The relationship between women is given much more screen time here, and we see both their common ground and where they clash. However, Joelle (Ashley Blaine Featherson) is probably the most grounding force in the show, with the best quotes. Where’s her episode?

During the SXSW screening, Simien said episode 5, which was directed by Moonlight’s Barry Jenkins, was the series’ “turning point.” Indeed the trauma and confusion of a cop pulling a gun on a black student spills out of that episode and into the next. The group comes together to fight for Reggie (Marque Richardson), though the show drops that storyline for a few episodes when it seemed like that would be the closing, dominant narrative.

There’s less satire in the series, and Simien pointed out that satire “often becomes a documentary.” Dear White People 2017 doesn’t have to worry about relevance. When the trailer debuted in February, critics claimed the show was anti-white, and there were even online campaigns to downvote it. But Simien had already experienced outrage and harassment when he started the Dear White People Twitter account as a means to finds Sam’s voice, and when the film debuted.

“Had I made a terrible mis-calculation?” he asks in a recent Medium piece. “Had I doomed my film and career to obscurity because I dared to put the words ‘white’ and ‘people’ next to one another in my title?”

In reality, DWP really just tells stories that aren’t white-focused, and points out all the ways people categorize: the “catchall Asian friend,” or the “Disney Channel Obama.” Joelle tells Sam: “You’re not Rashida Jones biracial, you’re Tracee Ellis Ross biracial.” Coco calls out the absurdity of the “Woke or Not” app everyone’s obsessing over. It even dares to lampoon Scandal.

The multi-protagonist format works for Dear White People, which has more of a shape now. It’s one of those rare movie-to-series reboots that actually benefits from longer exposition and serialization. It’s packed with more pop-culture references and cultural signifiers, but it’s rare that we get so many of these stories on-screen at one time.